On the evening of July 20, 2008, six hundred Falun Gong practitioners from the New York area held a candlelight vigil in front of the Chinese Consulate, in memory of those who were tortured to death during the persecution of Falun Gong in China. Practitioners also called for an end to the persecution.

The candlelight vigil was from 7:00-9:00 p.m. Practitioners displayed many truth-clarifying banners. 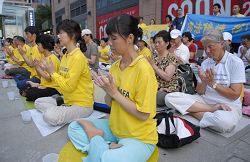 According to the Minghui/Clearwisdom website, 3168 Falun Gong practitioners have died due to persecution and torture. 54% are women and 57% are 50 years old or older. Hundreds of thousands of practitioners are jailed in forced labor camps and prisons where they are brutally tortured.

Two independent investigators, David Kilgour and David Matas, from Canada, have collected more than fifty pieces of evidence which show that the Chinese government harvests organs from Falun Gong practitioners for profit. The two investigators are planning to publish the third edition of their report on the organ harvesting atrocity.

Mr. Kilgour pointed out that a single piece of evidence may not be enough to prove the existence of the organ harvesting, but once all the evidence is combined, one can clearly see that organ harvesting from Falun Gong practitioners has existed in China for a long time.