On July 18, 2008, Falun Gong practitioners from New South Wales held a rally at Queens Plaza, clarifying the truth to the visitors coming for World Youth Week. 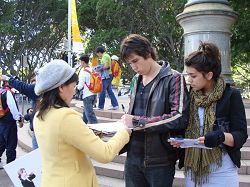 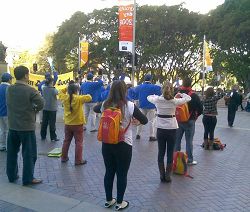 Falun Gong practitioners exposed the brutal persecution and introduced Falun Gong to the young people. They also passed out truth-clarifying materials and taught the exercises.

Ms. Lin, who moved to Australia from China five years ago, told a reporter that she has benefited a lot from Falun Gong both physically and spiritually. She had also been jailed in a detention center in China for practicing Falun Gong. She is happy in Australia where she can practice freely and tell people about the persecution.