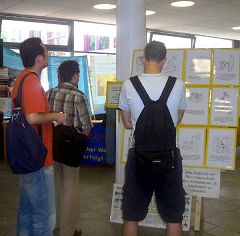 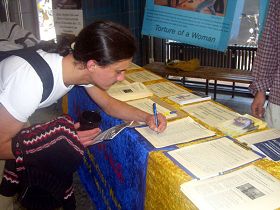 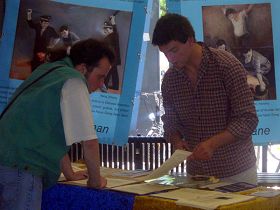 From June 30 to July 4, Falun Gong practitioners occupied an information table in the anteroom of the refectory in Karlsruhe University. They made use of lunch breaks to introduce the truth of the CCP's persecution of Falun Gong to teachers and students at the university, and at the same time to collect signatures for the "Million Signatures Global Campaign." Many people came to get relevant information on what Falun Gong is and why the CCP is persecuting Falun Gong. The practitioners explained that Falun Gong was spread in China in 1992, and one hundred million people benefited from it in just a few years. However, the CCP, which maintains its power with lies and violence, could not tolerate people believing in Falun Gong, so it started the brutal persecution of Falun Gong practitioners in 1999. For nine years, the persecution has brought enormous tragedy to Chinese people. After understanding the truth, many teachers and students signed their names on petition forms against this persecution.

One student signed his name on the petition form after learning about the CCP's harvesting organs from living Falun Gong practitioners. Afterwards, he came back with another student, and asked the practitioners for more information on live organ removal since it was indeed difficult for them to understand. When they learned that the CCP regime is committing all sorts of crimes unscrupulously, they eventually understood. The other student signed the petition as well.

“New Zealand: Practitioners Hold a Rally and March to Protest the Persecution (Photos)”