New Zealand: Practitioners Hold a Rally and March to Protest the Persecution (Photos)

On July 17, 2008, Falun Gong practitioners in New Zealand gathered in Wellington, the capital of New Zealand, to hold a rally and march calling for an end to the nine-year brutal persecution of Falun Gong by the Chinese Communist Party (CCP). New Zealand government officials attended the rally and expressed their support for Falun Gong. 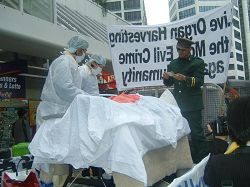 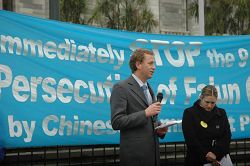 Green Party Co-leader Russell Norman says that he believes that Falun Gong practitioners have the right to persist in their belief, and the CCP's persecution of Falun Gong is unacceptable 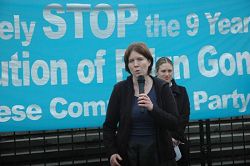 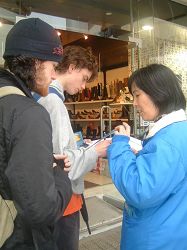 A practitioner clarifies the facts

At 9:30 a.m. on July 17, 2008, Falun Gong practitioners held a group practice in downtown Wellington. Their peaceful and harmonious exercises attracted much attention from people passing by. Many people inquired about practice sites in Wellington, and wanted to learn Falun Gong.

After the group practice, the "anti-persecution" march set off. Several dozen women practitioners dressed in white, holding portraits of practitioners who have died as a result of the persecution, led the the procession and slowly moved forward. Numerous kind-hearted New Zealanders were moved by the messages displayed on the banners. Practitioners also held banners and signs reading "Falun Dafa is Good" and "Immediately Stop the Persecution." Practitioners also reenacted the CCP's atrocity of harvesting organs from living Falun Gong practitioners on two display vehicles.

At noon, many office workers and local people passing by stopped to watch and ask for materials. Some New Zealanders had not learned about the CCP's live organ harvesting and they were so shocked after listening to a practitioner's truth clarification. They said they would tell their friends, and help stop such crimes against humanity. After people understood the evil nature of the persecution, they signed the "Million Signatures" petition expressing their support for Falun Gong. Some Chinese compatriots who have learned the facts told a practitioner quietly, "I support you. The CCP is so bad, I believe retribution will come soon."

Ms. Lydia Pabadopoulos, an official from BNZ Bank, watched the parade and was moved by the messages that Falun Gong practitioners displayed. She said that she believed any attempt to force others to change their beliefs was bad.

The parade procession ultimately reached the front of New Zealand Parliament House where a rally was held. Fifteen-year-old Anna was the first to speak. She talked about her mother who is being persecuted, and she called upon the international community to rescue her mother and strongly condemned the CCP's crimes.

Peter Dunne, who leads the United Future political party, sternly condemned the persecution. He explicitly said, "The persecution of Falun Gong is extremely absurd and completely unacceptable. In the past nine years, what Falun Gong cultivators have done, persistently promoting their belief, and peacefully and rationally working against the persecution, is very inspiring, and I also believe that they will achieve ultimate triumph."

Green party co-leader Russell Norman said, "I believe that Falun Gong practitioners have the right to remain steadfast in their belief, the CCP's persecution of Falun Gong in unacceptable. New Zealand government should let more people learn about the persecution, the government should make its righteous voice heard. The CCP promised to improve human rights when bidding for hosting the Olympics, but it has not fulfilled its promise, and the China's human rights conditions are even worse."

When night fell, practitioners held a candlelight vigil in the rain in downtown Wellington, commemorating Falun Gong practitioners who have died as a result of the persecution. They held banners telling passersby about the crimes being committed in China.