The annual multi-cultural festival at the twin cities of Kitchener-Waterloo was held from June 21 to 22, 2008 in Victoria Park. The local Falun Gong practitioners participated in this event and introduced Falun Dafa, a cultivation practice based on the principles of Truthfulness, Compassion, and Tolerance, to visitors. 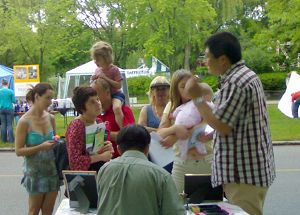 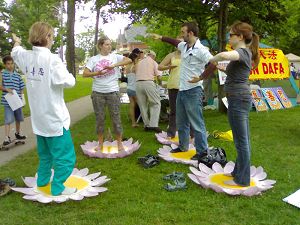 Some visitors learn the exercises during the festival 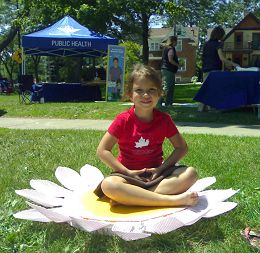 A young girl enjoys sitting on a lotus flower cushion

At the annual event, ethnic groups tried their best to display their cultures. Colorful tents extended about two miles long and the event attracted many local residents and visitors from other areas. Falun Gong has been participating in this event for years. They have information materials in both Chinese and English languages, beautiful lotus flowers, display boards and also provided free exercise instruction and instruction on folding paper lotus flowers during the event. The Falun Gong tent attracted many visitors. Many of them were attracted by the music "Pu Du" and came by to ask for where they can buy this music CD and where the exercise instruction site is.

A few Chinese came to the tent too. One mid-aged man said he has been following the Falun Gong issue for a long time and said he was urging his friends in China to quit the CCP and its affiliated organizations. He looked at the display boards and expressed his respect for Falun Gong practitioners. A Buddhist man came and announced his withdrawal from the Young Pioneers of Communism.