The "Truthfulness-Compassion-Forbearance" International Art Exhibition recently arrived in Kaohsiung, Taiwan. The art exhibition was held in the exhibition hall on the first floor of the Student Activities Center at National Kaohsiung First University of Science and Technology on May 26 through June 20, 2008. The forty-six paintings tell real stories that Falun Gong practitioners have experienced, display the goodness of Falun Dafa and cultivators' uncompromising spirit in the face of persecution, and their glorious journey of practicing "Truthfulness-Compassion-Forbearance" in their daily lives.

The exhibition attracted many students and teachers. Many people were amazed by the stories behind these artworks, thanks to explanations by a Falun Gong practitioner-curator and written introductory information in the gallery. Many visitors were also shocked at the brutality to which Falun Gong practitioners in China have been subjected. 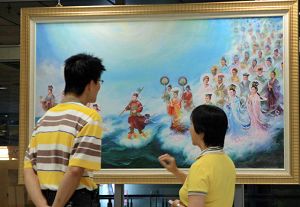 Students attentively listen to curator's explanation, and many are moved by the stories behind the paintings and the inner meaning of the artworks 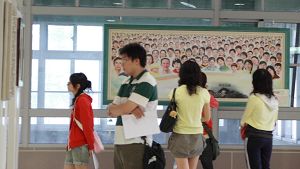 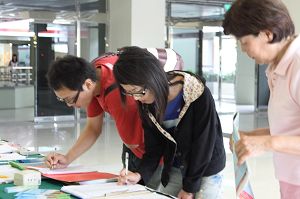 The head of the extracurricular activities group at the university's Students Affairs Office came the next day to visit the art exhibition. He said that some of his colleagues and students practice Falun Gong, and are all highly acclaimed for their work, their respect for others, and their handling of tasks and studies. He was puzzled why the Chinese Communist Party (CCP) suppresses such a good practice. Upon seeing the inhuman brutal persecution of Falun Gong practitioners portrayed in the paintings, his eyes filled with tears. After visiting the exhibition, he signed the petition calling for an end to the persecution. He also said he would ask his students to visit the exhibition and support justice. He asked for many lotus flower bookmarks, and wanted to hang one on each office door of student clubs in the activities center building, so that every student will see "Falun Dafa is good," "The world needs Truthfulness-Compassion-Forbearance," when they come and go from the student clubs.

A student from the Department of Information Systems intensively viewed every painting exhibited, and listened to the practitioner's explanations. She was very moved, and thanked the artists for telling people what is good and evil in the form of art. She also had her photo taken in front of a painting, because she felt very close and familiar to the heroine in the painting.

A student surnamed Chen from the Accounting Department ran to the exhibition hall to view the paintings. A Falun Gong practitioner explained the artworks to him and two of his classmates. They asked about the wide spread of Falun Gong overseas. Particularly, they knew that many university professors also practice Falun Gong, including Professor Yang Shuoying, whom they know. At the same time, they were shocked by the CCP's unreasonable persecution of Falun Gong. They said they will pay attention to the persecution news from China.

Professor Huang, who teaches in the Department of Marketing made a special effort to come visit the exhibition at his student's invitation. The curator explained the pieces, and Professor Huang expressed his support for Falun Gong, and condemned the CCP's brutality. He said that the (persecution) was so evil that everyone should stand up to condemn it.

A student surnamed Wang from the Department of Electronics had come to visit the exhibition after school was over. After visiting the exhibition, he pondered why Falun Gong was so good but the CCP persecutes the practitioners so cruelly. He came to see the exhibition again in hopes of getting answers from the paintings. Through the curator's elaborate explanations, he was moved to tears several times. In the end, he expressed hope that all persecuted Falun Gong practitioners will be rescued as soon as possible, and he is considering joining the Falun Gong Research Club at the university.

A young masters degree holder, Ms. Yang, who just returned to Taiwan from Japan, came to the university to apply for a professor's position. She was attracted by the posters for the art exhibition. Ms. Yang viewed the paintings carefully and listened to the curator's explanations, and she was moved by the exhibit. She said that while in Japan, her classmates who came from China told her that Falun Gong was [slanderous words omitted], which puzzled her. Later she visited websites and read some related materials about Falun Gong, including the electronic book, Nine Commentaries on the Communist Party. She also observed her good neighbor in Taiwan who is a Falun Gong practitioner. She confirmed that her classmates were wrong, and they were deceived by the CCP's negative rumors and propaganda. After visiting the exhibition, she learned about the brutality of the persecution, and that the CCP even inhumanly harvests organs from living Falun Gong practitioners. She strongly condemned the CCP's evil, and she expressed hope that overseas Chinese students from China in Japan can also visit the exhibition and learn the facts. She was very supportive of Falun Gong and asked practitioners to continue holding the exhibitions, and go to more universities so that more young people can learn the facts and cherish life.

A young man working at a canteen pushing a drink-trolley passed by the art exhibition. A practitioner gave him a lotus flower bookmark and invited him to come in his spare time to visit the exhibition. Shortly after, he invited his boss (manager of the canteen) Mr. Lin to come see the exhibition. Mr. Lin said that he only came to check the business once a month, and it was by chance he was there to visit this exhibition. While the curator explained, his eyes focused on two children in the painting "Assimilation," who are attentively reading a Falun Gong book and they are surrounded by an auspicious energy field. He was also attracted to the beautiful realm in the painting "Pure Lotus" where the heroine does the fifth Falun Gong exercise. These two paintings touched Mr. Lin, and he said he wanted to practice Falun Gong. He had been searching for cultivation ways for years and finally found the cultivation way he wanted. Mr. Lin was very moved and asked for many materials on learning Falun Gong.

The "Truthfulness-Compassion-Forbearance" International Art Exhibition, by using artistic form, continuously spreads the truth around the world. There are three complete sets of paintings in Taiwan. The exhibition has thus far been booked into the spring of 2009. The exhibition was held at the Kaohsiung First University of Science and Technology for more than twenty days, and the young students had an opportunity to learn and be clear about this persecution that is taking place and attracting global concern. The next stop for the exhibition will be the Taitung Social Education Center in Eastern Taiwan.