France: Chinese People in Paris Support the 38 Million That Have Quit the CCP (Photos)

On the 14th of June 2008, the French "Quit the CCP" Service Center held an activity to support the 38 million Chinese heroes that have already quit the CCP. The rally took place in Paris' 13th Arrondissement, the home of many Chinese immigrants. Factual information dispelled the deceptive CCP propaganda. Two Chinese making their declarations to quit the CCP appealed for more Chinese people to quit the Party as soon as possible. 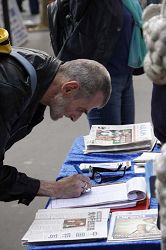 Exposing the evildoings of the CCP to the light of day 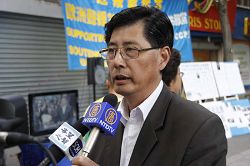 French Quit the CCP Service Center representative Mr. Hu said, "People have all seen what evil the CCP is capable of, particularly with what is going on in Flushing, NY. The CCP Consulate manipulates behind the scenes. They hired those hooligans and gangsters to make trouble and then tried to shift the blame on others in order to persecute Falun Gong. When the massive earthquake occurred, the CCP did not hasten to save people or even do much to take care of the living. Instead, they kept on persecuting innocent Falun Gong practitioners. We are here to entreat you: 'See clearly the CCP evil and no longer be deceived by it.' We also appeal to people to recognize Falun Gong and get to know what Falun Gong really is about, what it is we believe, and about what to be true to. Our banners say, 'Heaven Eliminates the CCP' and 'Heaven Blesses China.' During the decades it has been in power, the CCP has slaughtered about 80 million Chinese. Now it is the time for heaven to eliminate the CCP. We hope the deceived Chinese people hurry up to quit the CCP and safeguard their futures. Today, several people here have already quit the CCP and its subordinate organizations."

Chinese people quit the CCP during the rally

Mr. Zhang Xiaofeng came to Paris from Liaoning, China, in 2000. He came to the Paris Quit the CCP activity and announced his resignation from any and all CCP organizations. Mr. Zhang said, "Why do I want to quit the CCP publicly today? It's because, until now, I did not realize that we were all deceived. We've already seen that the CCP is a party dictatorship. From the top to the bottom it is corrupt. That's why I want to leave the CCP and this is the overall trend."

Mr. Zhang mentioned, "Nobody can hold back the current wave to quit the CCP and its subordinate organizations. Quitting the CCP is the choice of the general public and it's a historic certainty. This is also the start of the awakening of our nationality. Since there are a lot of people who are still being deceived, we should make use of the upsurge in quitting the CCP so that we can let more and more people realize the truth and realize the nature of the CCP dictatorship." 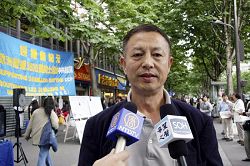 Mr. Chao, who came from Shenyang and is now a Parisian, announced his withdrawal from the CCP and its subordinate organizations at the rally.

Mr. Chao, who came from Shenyang, made his declaration to quit the CCP and its subordinate organizations. He said, "I agree with the idea of quitting the CCP very much. In my childhood I used to be in the CCP Young Pioneers, so I'd like to take this great opportunity to quit my Young Pioneer membership.

During the activity, Falun Gong practitioners played the video tapes about how the Chinese Consulate in New York manipulated and hired gangsters to assault New York Flushing Quit the CCP Service Center volunteers and how, in order to persecute Falun Gong, the CCP fabricated the Tiananmen self-immolation. Many Chinese passersby stopped to watch. They were attentive from beginning to end. The CCP deceptive propaganda was contradicted by the facts.

The activity attracted many Chinese who reside locally and came to hear the truth. 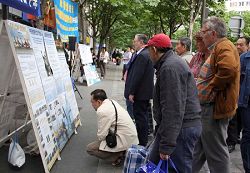 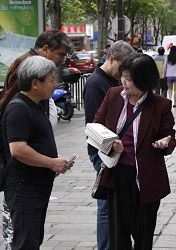 Volunteers with the Quit the CCP Service Center clarified the truth to the local Chinese. 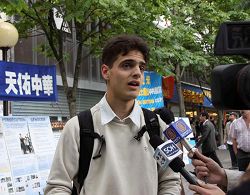 French student Gregoru Fichet said that realizing the truth of the persecution is very important for the Chinese.

Gregory Fichet is a French student. He said, "This is the first time for me to realize the fact that Falun Gong is being persecuted. It did not surprise me in the least that the CCP government is doing things of this kind. I feel that we should take action. Letting all the Chinese people know about this persecution is very important. I think the Chinese people are too tolerant of the cruel CCP dictatorship system. We should let more and more people realize the truth, take action, and work toward China's freedom. Also, we need to let French people know about these problems. Put pressure on the French government using the power of public opinion and then put pressure on the Chinese government. 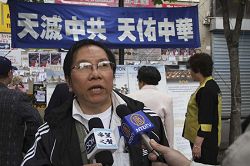 A photojournalist with the Reporters without Borders Organization, Mr. Ly Louis, said, "I hope would people hear the voice of Falun Gong."

Vietnamese immigrant Mr. Ly Louis is a photojournalist with Reporters without Borders. He said, "The CCP not only delivers false information to its citizens in mainland China, but it also broadcasts that propaganda to the 50 million overseas Chinese. If people can't find out the truth, they remain ignorant, and they will not know about the persecution of Falun Gong. It is such a terrible thing to live with lies. I hope more people will hear the voice of Falun Gong."

He also said, "Thirty-eight million people have already quit the CCP. That is an overwhelming movement. I hope that triple and even ten times that number of people quit the CCP. This is an international movement, indeed."