Yang Sen, the chair of the Mid-USA Falun Dafa Association, said, "Falun Gong practitioners will not give in to any tyrant powers. What the CCP has done exposes its evil nature. The American government has realized it, and certain organizations have started investigations into the assaults." Yang Sen warned the hoodlums that they will not obtain green cards if they commit crimes. He hopes those people will not destroy their own futures just for money, which does not last.

Yang Sen said that the thug attacked Pan Hongyi not only because he is the deputy-chief of the Epoch Times but also because he is a Falun Gong practitioner. 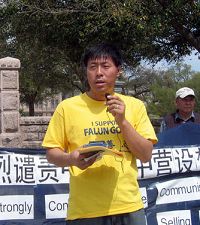 "First, the persecution against Falun Gong has lasted for nine years. Falun Gong practitioners have not and will not give in. We will not be frightened of the violence in Flushing, either. But through the violence in Flushing, we can imagine how severe the persecution is in China. We have the protection of the police in Flushing and the protection from American laws, yet we still were attacked. So we can imagine the situation in China.

"The CCP will not reach their goal. They try to destroy the Service Center for Quitting the Party and try to scare Falun Gong practitioners away, but it is impossible. What they have done has only made people recognize their evil nature. That is the only effect of their attacks," Yang said.

"Second, attacking Falun Gong practitioners because of their belief is a crime in America. The lawbreakers will be sued. They don't know anything about the laws in the US. They think that they can do whatever they want, just like in China. Many of them came to America illegally, so they want to obtain legal identification so that they can stay here. However, they don't know that if they commit crimes, they will never obtain a green card. Attacking Falun Gong practitioners because of their belief can be a felony, and they will never obtain citizenship. Those people came to America for a better future, but now they are destroying their futures just for the pocketful of money the CCP gives them. I want to tell them to stop committing these crimes, otherwise they will face serious consequences."

“France: Chinese People in Paris Support the 38 Million That Have Quit the CCP (Photos)”