From June 9 to 15, 2008, Jakarta Falun Gong practitioners held a Truthfulness-Compassion-Forbearance Art Exhibition at the capital city's largest department store. Shoppers stopped by and many were moved, especially by the stories behind the artwork. 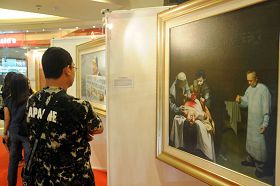 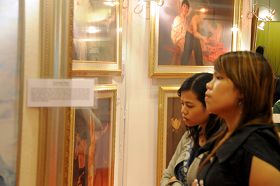 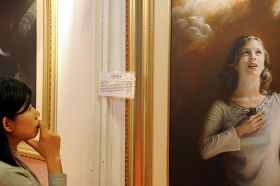 More than 40 works created by Falun Gong practitioner artists were shown at the exhibition. The artwork depicted the beauty and joy of cultivating Falun Dafa, the unyielding spirit of practitioners facing the brutal persecution by the Chinese Communist Party (CCP), and the appeal of practitioners around the world for upholding conscience and justice.

The department store is always packed with shoppers. One gentleman said that he had just come to Jakarta for a visit and ran into this exhibition. He said that the paintings were very beautiful and Falun Gong must be a very special practice which can bring people to exceptional realms.

A Dutch visitor said that he had heard about the persecution of Falun Gong in China and yet he didn't understand it. A practitioner then told him that the CCP maintains its control through lies and violence and it was afraid of the vast popularity of the practice which follows the principles of Truthfulness-Compassion-Forbearance. After chatting with the practitioner, this gentleman sincerely wished the practitioners' effort a success.

A Muslim lady said: "As a religious person, I condemn this brutality."

One couple viewed all the artwork. Upon seeing a painting which shows a young lady holding her baby in her right arm reading Zhuan Falun, the husband exclaimed: "So beautiful!" His wife was deeply touched by the painting "Tears of an Orphan." The painting depicted a little orphan boy holding his parents' ashes and wondering about his future. His parents had died during the persecution.

A young man came to the store to shop and stopped by the exhibition. Several hours later, he came back. He said: "I brought my sister here to see this exhibition."

At the exhibition, a number of visitors said that they wanted to learn the Falun Gong exercises and asked for practice site information.