On June 16, 2008, the Swedish Parliament held a seminar on China's human rights in the capital city of Stockholm. According to participants, the purpose of the seminar was to raise awareness in the Swedish community of the Chinese Communist Party's (CCP) human rights abuses so that appropriate measures could be taken to force the CCP regime to respect freedom of expression and belief and to immediately stop the persecution of Falun Gong practitioners and human rights activists in the run-up to the Olympics. 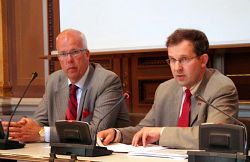 The Vice-President of the European Parliamentary Assembly, Goran Lindblad and a member of the Swedish Parliament, Lennart Sacredeus, hosted the meeting. 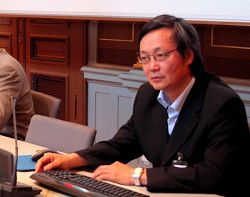 The director of the International Human Rights Association, Mr. Man Yang, relayed recent incidents in which the CCP, out of fear for the millions that quit its affiliated organizations, organized attacks on Falun Gong practitioners in New York and Warsaw, by inciting hatred.

A Falun Gong practitioner, Kong Bin, re-counted his own experience of being arrested five times in China for his beliefs and subjected to forced brainwashing and a year and a half in a labor camp. He was also threatened that if he did not give up his belief, he would be sent to "a place of no return." Later he realized that the place they were referring to must be one of the secret facilities in China where they conduct organ harvesting on living Falun Gong practitioners.

According to the seminar hosts, with the Beijing Olympics fast approaching, not only did the CCP government not improve human rights as promised, it accelerated the persecution of Falun Gong practitioners, Tibetans, human rights activists and other religious groups in the name of the Olympics.

The Vice-President of the European Parliamentary Assembly and a member of the Swedish Parliament, Goran Lindblad, said during an interview, "We will continue to publish and discuss what is happening in Communist China and the Communist regime's repression of its people. As such this seminar is very important."

Lindblad also said that democratic countries are fed up with the CCP infiltration overseas in an attempt to stop western criticism. He said, "They (the CCP) use Confucius colleges in Universities as spy and propaganda centers to influence (western) students and governments. On one hand they play tough by planning demonstrations. On the other hand, they have these soft strategies. But they will never succeed!"

“France: Chinese People in Paris Support the 38 Million That Have Quit the CCP (Photos)”

“Slovakia: Raising Awareness about Falun Gong in the City of Samorin (Photos)”