(Clearwisdom.net) On April 26, 2008, U.K. Falun Gong practitioners held a rally and parade in downtown London to commemorate the peaceful appeal at the State Appeals Office in Beijing on April 25, 1999. The activities lasted for five hours and attracted the attention of a large number of people. Many people from China were among those who signed the petition protesting the persecution after learning the facts about the persecution.

The grand parade spreads the facts about Falun Gong

Falun Gong practitioners began their march in London's busy business district. The procession set off from the Chinese embassy, and then proceeded to Oxford Street, Chinatown, Leicester Square, and finally arrived at famous Trafalgar Square. The procession was made up of three groups, a waist drum team, a team in white clothing that held the photos of the practitioners that were persecuted to death, and a team featuring the support for the 35 million Chinese quitting the Chinese Communist Party (CCP) and its affiliated organizations.

In every segment, there were Falun Gong practitioners holding English and Chinese bilingual banners. The banners in the first segment featured the goodness of Falun Dafa, which read "Falun Dafa," "Falun Gong, A Peaceful Meditation," "The World Needs Truthfulness-Compassion-Tolerance" and "Falun Dafa Benefits One Hundred Million People." Those in the second segment featured the anti-persecution message, which read "Falun Gong Practitioners Tortured to Death in China," "CCP's Organ-Harvesting Atrocity Is Against Humanity," "Stop Genocide in China," "Mourn for Musician Yu Zhou Who Was Killed by the CCP in the Name of Hosting Olympics," "China Must Stop Persecuting Falun Gong before the Olympics," "Please Help to Stop the Persecution of Falun Gong." Intended to arouse the Chinese people's awareness of the wave of quitting the Party, the banners in the third segment, read "CCP = Violence + Lies", "CCP's Authoritarian Control Resulted in the Death of 80 Million Chinese People," "The CCP Is Doomed to Be Eliminated by Heaven," "Quit the CCP Before It Is Eliminated by Heaven," "Don't Become the Accomplices of the CCP," "Support 35 Million Chinese Quitting the CCP" and "Welcome a New China Without CCP."

Rally at the Trafalgar Square

The magnificent Falun Gong procession attracted a lot attention of people on the streets. Some passersby stopped to attentively read the flyers they just received on the busy street.

After arriving at the Trafalgar Square, Falun Gong practitioners held a press conference first and then demonstrate the five sets of the Falun Gong exercises. After raining for some consecutive weeks, the weather in London today was exceptionally good. Since it was the first time for the city to have bright sunshine on a weekend, the streets in downtown were packed with people. There were a lot of tourists on the Trafalgar Square. Once Falun Gong practitioners arrived there, it suddenly became the limelight of attention. Tourists thus came over from all directions to listen to the remarks given at the rally, read the flyers and watch the demonstration of the Falun Gong exercises. Many people also signed the petition calling for an end of the persecution. Some people even started to learn the exercises on the spot.

In his remarks, Peter Jauhal, Chairman of the U.K. Falun Dafa Association, said that the Chinese Communist regime has escalated the suppression against Falun Gong practitioners and other groups in the run-up to the Olympics. In addition to demanding the regime immediately release all of the "Olympic prisoners," he also called on various communities and the British government to help put an end to the regime's persecution of Falun Gong.

Mr. John Dee, Vice President of the European Friends of Falun Gong, also attended the rally to support Falun Gong. He said, "It is time for the entire world to clearly recognize the intrinsic vicious nature of CCP. The Western countries must stop the Chinese regime's persecution against Falun Gong and terminate the compromise with the regime. To date, the regime still fails to improve its human rights record as it promised seven years ago when bidding for hosting the 2008 Olympic Games to the International Olympic Committee."

At the rally three Falun Gong practitioners who were once imprisoned in China's forced labor camps for practicing Falun Gong shared their experiences of suffering cruel tortures and urged people around the world to help put an end to the persecution of Falun Gong.

Quite a lot of Chinese were among the people watching the parade and the rally. Some of them stayed there for a long time, and even took the initiative to talk to practitioners.

Mr. Xu and Mr. Ho are Chinese students studying in the U.K., and it was their first time to see a large-scale Falun Gong rally. They were shocked because what they saw there was completely different from what reported by the media in China. They also expressed that they would like to find the truth about Falun Gong. Mr. Ho said, "I'll try my best to find the truth of this matter. If I find it someday, I'll come forward to speak up." Mr. Xu also expressed that he would find the truth as well. He said, "I'll stand up to uphold justice."

Another Chinese young man surnamed Lai said that he heard of Falun Gong, and thought it inconceivable that the Chinese regime harvested organs from living Falun Gong practitioners. He expressed that based on what he saw today, Falun Gong is a peaceful meditation, and is a righteous belief, and that the activities held by Falun Gong practitioners that day was very good as it could convey a clear message to the Chinese government: "As the rest of the world is able to accept Falun Gong, why can't China?" 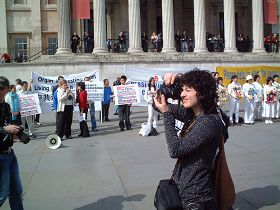 Domnika, a freelance photographer from Poland, videotaped the activities organized by Falun Gong practitioners for several hours. She said that as she was in the process of preparation for a photographic competition called "Made in China". She thought the rally had much to do with the theme of the competition. She also mentioned that she would try to learn more about Falun Gong. 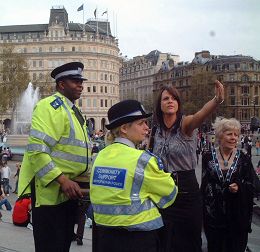 Mr. Dixon, an elderly British who currently lives in Belgium, was attracted by the exercises demonstrated by Falun Gong practitioners. Upon learning about the CCP's persecution of Falun Gong, he said firmly at once, "No good to anybody is Communism." He said he thinks that the communist party should be eliminated.

Ms. Jackey from Australia said that she saw Falun Gong parades many times in Australia and she is pleased to see Falun Gong being spread everywhere around the world. She can't understand why CCP persecutes Falun Gong. She said persecution of innocent Falun Gong practitioners is wrong and she sincerely hopes it ends soon.

Jena is a retired nurse in her 70s who immigrated from Cape Town of South Africa to the United Kingdom a few decades ago. As a Christian, she was shocked by the crimes of the CCP's organ harvesting from living Falun Gong practitioners. She believes such acts are against God's will and should be stopped. She said, "Falun Gong practitioners have to persevere with these efforts." 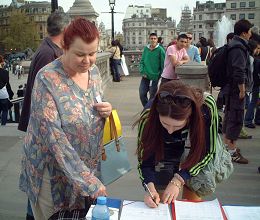 Ula and her daughter said, "It is great that practitioners are spreading the truth here."

A British mother, Ula, and her daughter carefully watched Falun Gong practitioners demonstrate the exercises. Ula said, "These are extremely peaceful and very balanced exercises." Both of them said that they felt sad about the on-going persecution and thought the CCP's actions are ridiculous. The daughter said, "It's great that you're here spreading the truth to people from all over the world." Later both of them signed the petition.

“Local Chinese in Vancouver: Proud To Be Chinese”