April 25, 2008 was the 9th Anniversary of the April 25, 1999 Beijing peaceful appeal in which ten thousand practitioners participated. The day happens to be the Anzac public holiday in Australia, commemorating Australian and New Zealand's fallen wartime soldiers.

Practitioners held up banners to form a "wall of courage" near the Prince Bridge in the city center, to commemorate this special historic date, and to clarify the facts about Falun Gong and the on-going persecution in China. Since April 25, 1999, practitioners have strictly adhered to the principles of "Truthfulness-Compassion-Forbearance" and courageously resisted the persecution with great compassion.

Practitioners form a wall of courage at Prince Bridge 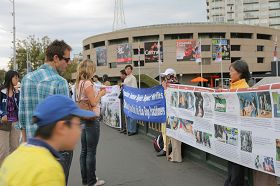 Local people learn about the persecution 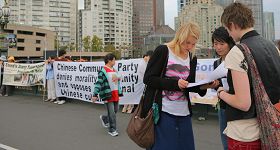 Mr. Xiao Zhonghua from the Melbourne Falun Dafa Association said, "Today is the 9th anniversary of April 25, 1999, and since that peaceful appeal attended by up to ten thousand practitioners, they have walked their path with indomitable will and clarified the facts to people in a peaceful and rational manner. The past nine years have witnessed a soul-stirring battle between the righteous and the evil. We will continue to clarify the facts about the persecution to governments at various levels and to the general public, until the persecution stops."

The wall of courage formed with dozens of banners provided ample information about Falun Gong and about the Chinese Communist regime's brutal persecution of practitioners, carrying a clear message, "Falun Dafa is good," "Stop the persecution!" Once learning the truth, many passers-by expressed their opinion that persecution must be stopped and signed the petition. 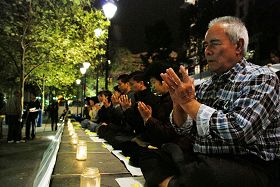 Candlelight vigil commemorates those who lost their lives in the persecution

Professional singer Charles Deron comes to the bridge each day to practice his singing. This day he saw the banners where he usually practices, and his curiosity got the better of him. He asked practitioners for more information. On learning the facts of the persecution in China he said, "No one has the right to persecute others. What we should do is try our best to stop the persecution. I shall do everything I can [to stop the persecution], even though what I can do is as small as a finger nail, I shall do all I can to help, and I will be happy to help."

Dianne Padalini is an Aborigine and has a habit of meditating every day. She told practitioners as she drove across the bridge, a voice in her heart told her to stop and take a look. So, she parked her car, walked on the bridge and then saw the "wall of courage." She said, "I was shocked to learn that kind-hearted people who meditate and who believe in 'Truthfulness-Compassion-Forbearance' are persecuted and even more shocked to learn that their organs were harvested and sold for profit. I believe people the world over must awaken their conscience. We must pray and use the power of righteous thoughts to change the way the Chinese government is doing things."

Later in the day, practitioners held a candlelight vigil in the city square, to commemorate the thousands of fellow practitioners who had lost their lives due to the persecution. The gentle candlelight encouraged more people to learn the facts and find their way toward a bright future.