A group of Falun Gong practitioners gathered in front of the Chinese Embassy in Ottawa to commemorate the ninth anniversary of the April 25, 1999 appeal and protested the Communist Party regime using the Olympics to arrest numerous practitioners. A few who participated in the epic 1999 appeal shared their accounts. 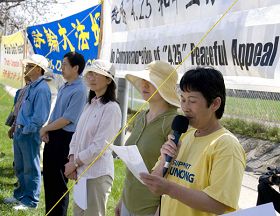 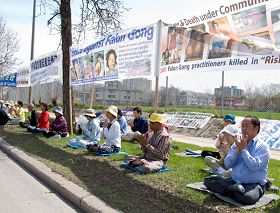 In front of Chinese Embassy in Ottawa, condemning the persecution

Ms. Wu, a Beijing native, was one of the 10,000 practitioners who appealed on April 25, 1999. She recalls, "Before I went, I heard a practitioner-colleague say the police in Tianjin had mistreated many practitioners, and there were also slanderous media reports. I had practiced Falun Gong for only a short time then, but thought since we only wanted to be good people, the regime's injustice was uncalled for. I hoped we would get an opportunity to communicate with ruling representatives, so Falun Gong practitioners would be granted an undisturbed environment in which to practice."

"Many practitioners were already present when I arrived at Fuyou Street the morning of April 25, 1999. Lots of them came from other cities and provinces. There were scores of uniformed police and in civilian clothes. I saw surveillance cameras mounted on a wall hidden behind tree branches. More and more practitioners arrived in a constant stream. The police did not try to disperse us. Later on, the police led us in a certain direction; a number of practitioners were guided to Changan Street to prevent congestion. We all stood on the sidewalk to avoid blocking traffic. It was very peaceful, and there was no conflict."

"A few police officers chatted with practitioners. I remember one officer said he had relatives who also practiced Falun Gong. It was hot. One practitioner bought bottled water and distributed it among the practitioners and the police. We stood there quietly until three practitioners were allowed inside to speak with premier Zhu Rongji. In the evening we were told, 'An official has met with the practitioners, and the matter has been resolved in a satisfactory manner. You can go home now.' So we left peacefully."

"In fact, we never 'surrounded' or 'attacked' anyone or anything; otherwise, why didn't the police stop us then instead of taking us here and there? They were setting a trap."

Ms. Liu, who studied at Beijing University said, "Many people were practicing Falun Gong back then, especially in the Haidian District where many institutions of higher academic learning were located. We all thought the problem was over after April 25, and we would be able to continue to practice in peace; yet, the Communist Party chose a time when the students were on summer break [July 20, 1999] to launch the nationwide persecution. The appeal was the Party's pretext for doing so."

Liu said Lei Xiaoting, an alumnus who graduated from Peking University's English Department helped organize a press conference in Beijing in October 1999 to explain the truth about the persecution. She served as an interpreter during the conference and was subsequently sentenced to prison and was held at the Beijing Women's Prison on March 10, 2000, in complete violation of the Chinese constitution.

Liu's friend from Guangzhou went into exile to avoid persecution, and her whereabouts are unknown. Liu said, "They were the best students and good people who followed Truth, Compassion, and Tolerance. Yet, the persecution broke up their families and rendered them homeless."

Xun Li, chairman of the Canadian Falun Dafa Association said, "Since the beginning of the persecution, the Communist Party fabricated countless 'reasons' to justify the violence, such as 'attacking Zhongnanhai,' 'political involvement' and 'self-immolation.' Nevertheless, Falun Gong practitioners have never cowered. They kept telling the truth during the past nine years."

Practitioner Grace Wollensak said, "The Party accused Falun Gong practitioners of 'political involvement' because of the April 25 appeal, and now it's using the Olympics to suppress us further. According to a Clearwisdom report, 1,878 practitioners have been arrested in recent months before the beginning of the Olympics. Well-known Beijing-based musician Yu Zhou was arrested and killed within two weeks. The Olympic charter advocates human dignity, but that is what the Party is stamping out."

"Falun Gong practitioners have always opposed the persecution through peaceful means, and this calmness and rational reasoning has inspired and encouraged many Chinese people. More than 35 million Chinese have withdrawn from the Party and its affiliated organizations. Obviously, any form of persecution of the Chinese people would only speed up the Communist Party's demise."