(Clearwisdom.net) On April 16, 2008, Falun Gong practitioners in Montreal, Canada, held a rally at Zhongshan Park in Chinatown to commemorate the ninth anniversary of the "April 25" peaceful appeal in Beijing. With the same peaceful and rational spirit that prevailed on April 25, 1999, practitioners exposed the ongoing persecution of Falun Gong by the Chinese Communist regime over the past nine years. They called for the international community and people from all walks of life to condemn the Chinese Communist regime's brutal conduct and help bring an end to the persecution. 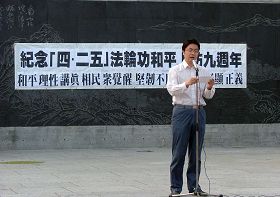 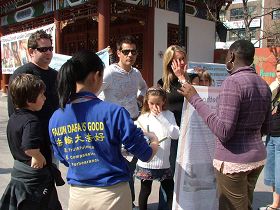 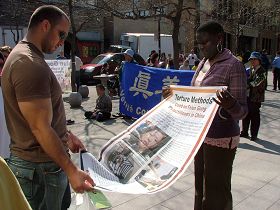 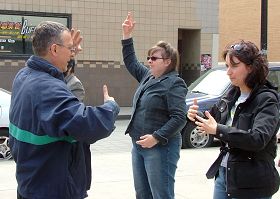 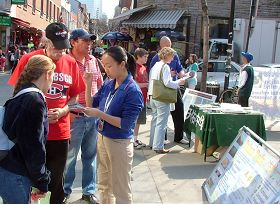 A family on holiday from Vermont came to understand the persecution 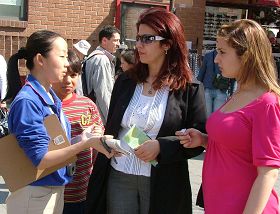 A practitioner said, "Throughout the nine years of persecution, the Divine Land (China) has been spattered with blood. However, the real victims are not only practitioners of Falun Gong, but also the many Chinese people, who, under the regime's control, became unwitting accomplices in the killings. In the face of the cruel persecution, practitioners have put themselves and their personal safety at risk and persevered in "clarifying the facts" to people. Consequently, more and more people are able to step out of the shadow of the CCP's lies and have changed their formerly hostile attitude toward the practice, which can bring them great benefits. Practitioners outside of China have selflessly contributed their own time and money to expose the Communist regime's cruelties, thereby inspiring compassion, while many practitioners inside China have lost their lives."

The rally lasted approximately three hours. More than ten practitioners gave prepared speeches. They clarified the facts of the persecution endured by practitioners over the past nine years. The event attracted many bystanders. Practitioners were very busy handing out informational materials and collecting signatures for the "Million Signatures" campaign. Many passers-by heard about the persecution in China for the first time and asked practitioners for further details.

One man asked after reading the materials, "Why is the Chinese Communist regime persecuting such a good practice like Falun Gong? It is really hard to comprehend." He then asked for the address of the local practice site, and said he would there go to learn the exercises the following day.

A family of four on holiday from Vermont had never heard about the persecution. They spent a long time at the rally reading the truth-clarification materials. The mother and two children listened carefully while practitioners were telling other people about Falun Gong and the persecution. The father held down two corners of a banner, attentively reading the information on the banner about the persecution. The boy, approximately ten years old, also looked carefully at the truth-clarifying materials. The mother asked practitioners three times, "Why are people being persecuted simply for practicing Falun Gong?" When she learned about the benefits Falun Gong that can bring to people's minds and bodies, she asked for more information and said she would send it to her father.

Five youths, around 16 or 17 yeas old, solemnly signed the anti-persecution petition after hearing the facts. One of the boys asked, "What can I do to help?" But he quickly thought of a way, "Please, give me a petition sheet. I will photocopy it for other students at my school, so they can all sign to help stop the persecution."

Over the past nine years, more and more people have learned the facts and are now able to distinguish good from bad as a result of practitioners' unyielding truth-clarification efforts. When a Chinatown Chinese restaurant worker walked past the rally, he told practitioners who were distributing pamphlets, "Falun Dafa is good!"

A local Chinese family of five arrived. When they saw the rally, they stopped to listen to a practitioner clarifying the facts. A little while later they returned and gave that practitioner ice-cream they had especially purchased for her. The mother said, "We brought our children here and learned about Falun Gong and the persecution of practitioners. We cannot bear it, especially the suffering of children. She (the practitioner who spoke with them) is doing something very remarkable."

On Saturday the weather was fine, and as a large number of people went to shop in Chinatown, the practitioners ran out of forms for the "Millions of Signatures" campaign, initiated by the Coalition to Investigate the Persecution of Falun Gong (CIPFG). Many people in the crowd heard about the practice for the first time and wrote down the addresses for local practice sites, saying they would like to learn to practice as well. Two women joined the exercise group that day.

April 25, 1999, is a milestone, which will forever be recorded in history. Nine years ago, approximately ten thousand Falun Gong practitioners gathered of their own accord at the State Council Appeals Office in Beijing. They did so to peacefully appeal after a series of adverse incidents across China, including the slander and framing of Falun Gong. This defamation was carried out by those with ulterior motives, such as He Zuoxiu, and included the unlawful arrests of 45 practitioners in Tianjin. Practitioners went to appeal for the release of those who were wrongly detained and petitioned the authorities to allow them a relaxed cultivation environment and also the freedom to publish Falun Dafa books. Then Premier Zhu Rongji received practitioners, and as a result, preliminary resolutions were agreed to. Afterwards, the practitioners left peacefully.

However, on July 20, 1999, because of resentment, envy, and loathing of Falun Gong's popularity, former Chinese Communist leader Jiang Zemin, utilizing the "April 25" peaceful appeal as a pretext, officially and in complete violation of the Chinese Constitution, launched history's most evil and brutal persecution. Ridiculous lies and false evidence were carefully fabricated; a large number of practitioners were arrested, tortured, put through coercive brain-washing, raped, forced into mental institutions, or had their organs harvested and sold for profit. Their families were also severely implicated and persecuted. Jiang Zemin's evil regime used all kinds of ruthless methods to torture practitioners physically and torment them mentally. This resulted in thousands of deaths, and undreds of thousands Falun Gong practitioners were incarcerated and suffered unimaginable misery, while countless families were torn apart.

To date, the number of practitioners verified to have died as a result of the persecution has reached 3,149. The actual figure could be several times higher. Even more chilling is the Chinese Communist regime's crime of organ harvesting for profit from living practitioners. Furthermore, the regime is now using the Olympic Games as another pretext to escalate the persecution of Falun Gong by mass arrests of practitioners. In the last few months alone, 1,878 such arrest incidents were reported.