Close to 500 Falun Gong practitioners in Bali, Indonesia, celebrated World Falun Dafa Day (May 13) and Master Li's birthday in Kuta on May 11, 2008. They held a parade along the seashore, demonstrated the five sets of Falun Gong exercises, distributed flyers, and publicized the persecution of Falun Gong in China to tourists. 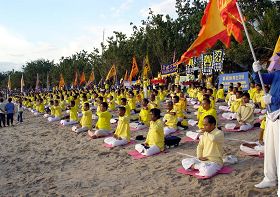 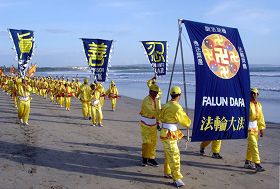 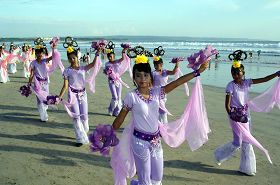 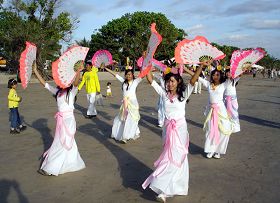 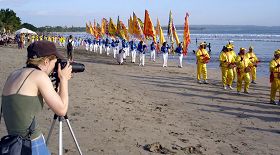 A tourist fascinated by the parade

Tourists drawn to the parade 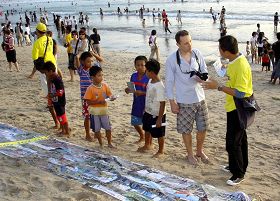 A tourist asked for information about Falun Gong 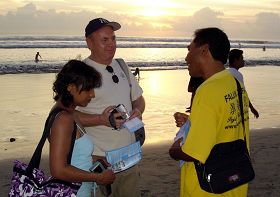 The activity started at 4:10 p.m. The parade procession began at the Hard Rock Hotel on the seashore and followed along the beach to Legian before returning to the Hard Rock Hotel, a three-kilometer route. A large banner reading "Falun Dafa" headed the parade, followed by three banners "Truthfulness," "Compassion," and "Tolerance." A waist drum troupe followed the banners. Lines of flags were at the end of the procession. Young Falun Gong practitioners from the Minghui School also participated in the parade and gave dance performances.

The powerful drumbeats were heart shaking. The many tourists were fascinated with the drums and the song "Falun Dafa Is Good." Those who went to the beach to watch the sunset were fortunate to get an opportunity to see the parade, and many took pictures of the parade. Falun Gong practitioners distributed flyers in different languages. Some talked to tourists to clarify the facts about Falun Gong.

Practitioners also demonstrated the five sets of exercises. Many tourists copied their movements from beginning to end. 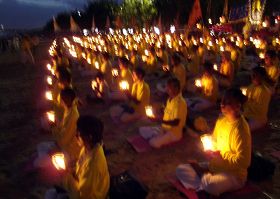 The exercise demonstration ended when the parade procession returned to the Hard Rock Hotel. All practitioners sent forth righteous thoughts and held a candlelight vigil to mourn their fellow practitioners who have died due to the CCP persecution of Falun Gong.