(Clearwisdom.net) Practitioners in Melbourne celebrated Falun Dafa Day on May 10, 2008. Events included a parade, live entertainment including dance, song and exercise demonstrations, and a photo exhibit about the persecution. 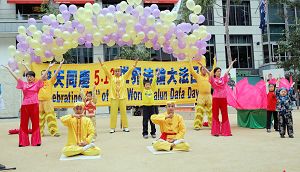 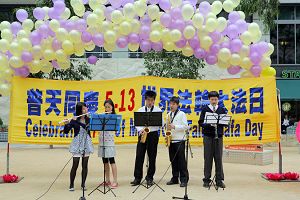 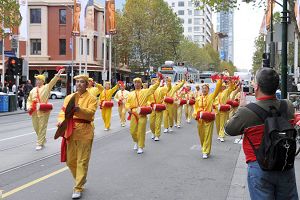 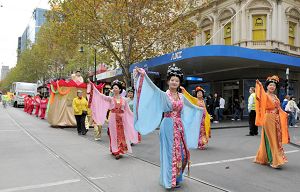 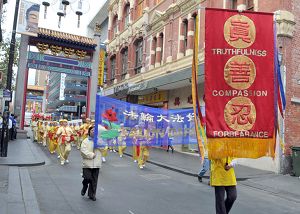 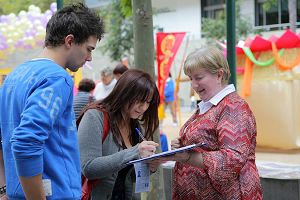 May 13 is World Falun Dafa Day. This is a very special and sacred day for Falun Dafa practitioners around the world. On May 13, 1992, Mr. Li Hongzhi, founder of Falun Dafa, introduced Falun Dafa to the public. Sixteen years later, the followers of "Truth, Compassion, and Forbearance" can be found in over 80 countries and regions around the world. Since 1999, Falun Gong has endured brutal and unprecedented persecution by the Chinese Communist Party. Practitioners have persisted in their belief and wrote a new chapter of world history.

The parade in downtown Melbourne was magnificent. The first section was led by the waist drum band, followed by a lotus float, Tang-style dancers, and fan dancers. The second section was about the persecution, including mourning the Falun Gong practitioners who have died in the persecution, a torture exhibit, and a reenactment of organ harvesting from Falun Gong practitioners.

Passers-by took photos and asked for materials about the persecution, as well as the Nine Commentaries on the Communist Party. After nine years, many people in Melbourne are already familiar with the persecution. When the parade reached Chinatown, a passer-by explained the organ harvesting atrocities to her friend. A Westerner who was having lunch in Chinatown said, "The government banned such a peaceful meditation group. What do they really want? It's unbelievable."

Falun Dafa is deeply rooted in the Chinese culture of cultivation, yet it transcends racial and cultural boundaries. Practitioners in Melbourne come from different backgrounds, but language and cultural barriers did not stop them from learning Falun Dafa. Through cultivation, their physical and mental health both improved. Some of them had painstakingly sought the meaning of life, and found their answers in Falun Dafa cultivation. Some went through life changes and dangerous physical injuries, and Falun Dafa restored their health. Some had acquired bad habits and became homeless, and Falun Dafa turned their lives around. On this celebrated Falun Dafa Day, we share with these practitioners the joy of cultivation in Falun Dafa.

When you meet Craig, it is hard to imagine that this healthy, polite young man used to be addicted to drugs. He has been cultivating for over two years. He learned Falun Dafa around Christmas of 2005, when he was unemployed and homeless because of his addiction. He often spent the night on a bench in a park. One day, he saw Falun Dafa practitioners doing the exercises together on a nearby square. He became interested and studied the exercises everyday. After that, the changes in him were huge. He quit drugs and found a full-time job. He also moved back home with his mother. She was so happy to have her son back that she cried. Craig said that Falun Gong cultivation not only improves one's physical health, but also changes one's mental state. Whenever one encounters difficulties or obstacles, one will use a positive attitude to handle them.

George is a Falun Dafa practitioner from Greece. He has been cultivating for four years. Since he began this practice, he quit smoking and alcohol, and stopped telling lies. His body felt relaxed and energetic. He said, "I just want to say one thing: Falun Dafa is great."

Barbara is from Poland. She used to be an architect, and have practiced Falun Dafa for five years. Before then, her friend had recommended that she practice, but she said she was too busy to find time for it. One day, she had an accident at work and fell from the scaffolding of a building. The bones in her hands and feet were all crushed, and her brain suffered injuries as well. The doctor told her she might be permanently disabled. However, Barbara was fortunate. While staying in the hospital, she read Zhuan Falun thoroughly and began doing the exercises. One night, not long after leaving the hospital, she felt electricity in her hands. Since that time, the pain stopped. Barbara said that Falun Dafa was not only beneficial for her health; its deep meanings can only be felt during solid cultivation. "As long as you follow Truthfulness, Compassion, Forbearance, you will have a healthy body and a calm heart. Everything will become wonderful."

Simon Vereshaka from Ukraine has practiced for 10 years. He said, "Today is a day of celebration across the world. During the parade, the police has helped us by directing traffic. When I told the Chinese people, 'Falun Dafa is great,' they also say, 'Yes, Falun Dafa is great.'" Since practicing Falun Gong, Simon has benefited greatly. He maintains a calm heart and treats everything he encounters with "Truthfulness, Compassion, Forbearance." Simon is a horticulturist and needs to do hard labor sometimes. But as soon as he practiced the exercises, his tiredness would disappear.

After the parade, Falun Gong practitioners in Melbourne hosted a performance art event. They used music and dance to express their gratitude to Teacher and Falun Dafa. Many people also learned the truth about the persecution from the photo exhibit on the square.