On the morning of May 13, 2008, Falun Gong practitioners in Macao celebrated the 9th World Falun Dafa Day and the 16th anniversary of the public introduction of Falun Dafa. They distributed balloons printed with "Falun Dafa Is Good" and "The World Needs Truthfulness-Compassion-Tolerance." They brought the beauty of Falun Dafa to the citizens of Macao. 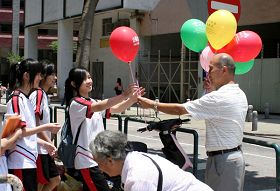 Since Falun Dafa was introduced to the public in 1992, it has attracted one hundred million people because of its miraculous effects on health and uplifting morality. Out of jealousy and fear of "Truthfulness-Compassion-Tolerance," the Chinese Communist Party launched an illegal persecution of Falun Gong on July 20, 1999. Over the past nine years, practitioners have continued in their efforts to bring the persecution to an end. Falun Gong has spread to more than 80 countries around the world. Practitioners in Macao continue to clarify the true story of Falun Gong and bring the benefits of the practice to local residents.