On the evening of March 27, the Divine Performing Arts successfully completed a performance at Concert and Congress Center in Linkoping. The audience applauded with enthusiasm at the end of the show, and the performers made repeated curtain calls. As the show ended, the audience was already anticipating the Divine Performing Arts' return next year.

Swedish federal Member of Parliament Gunnar Axen, also Chairman of the Taiwan Friendship Organization in the Parliament, spoke highly of the show. He said, ""I think it was a marvelous show, really fantastic, and I enjoyed it very much. The show was pure gold and very inspiring. It's a very expressive, but also a very harmonized show." He continued, saying that the show expresses "fundamental thoughts about philosophy, spirituality and religious views...in a very cultural way that is very, very inspiring." 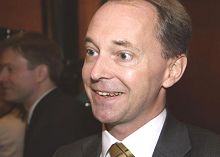 MP Gunnar Axen, also Chairman of the Taiwan Friendship Organization in the Parliament, at the VIP reception

Mr. Axen, who is a fan of Chinese culture, traveled from Norrkopin just to attend the Spectacular. He said he enjoyed every dance and song and hoped everyone could go see it, "once, twice, or several times." He said, "There is another show on April 3 in Stockholm. I hope everyone that has heard of it can go. Now I am already looking forward to [Divine Performing Arts'] next trip to Sweden."

This is the first time that the Divine Performance Arts has visited Linkoping, and Linkoping has become more famous because of it. The Chinese Embassy in Sweden has tried to interfere with the performance there. All seven parliament members from the Province of Östergötland expressed their resistance to the Chinese Embassy's threats. All seven members attended the Chinese Spectacular, showing their support for the show.

Mr. Axen is one of the seven members. He thinks that the Chinese government's interference with the Divine Performing Arts could not be tolerated. He said, "[The Chinese Embassy's interference] is not acceptable at all because we are a country with democracy and respect for human rights and everyone here has a right to express themselves."