The Divine Performing Arts Touring Company will arrive in Sydney on April 2, 2008. As the news spreads, the local media, including newspapers such as The Sydney Morning Herald, The Australian Chinese Daily, and Harian Indonesian, and the Australian Dance Teachers and Dance Artists magazine published large ads and detailed reports on the Chinese Spectacular. 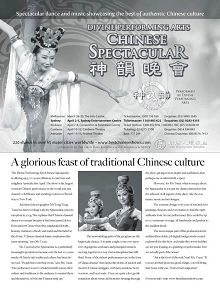 Article from the Australian Dance Teachers and Dance Artists magazine

The Harian Indonesia newspaper reported, "The Divine Performing Arts continue their successful international tour with sell-out shows from Broadway to London and return to Sydney with a new Chinese Spectacular program in April 2008. Within months of its inception in 2006, the Divine Performing Arts (DPA) performed for more than half a million audience members on some of the world's greatest stages, such as New York City's Radio City Music Hall, San Francisco's Opera House, Berlin's Internationals Congress Centrum, and Paris' Le Palais des Congres." 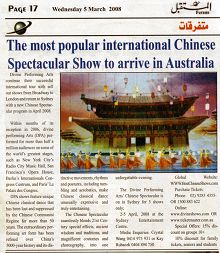 Report from the Indonesian newspaper

"The DPA shows feature unique Chinese classical dance that has been lost and suppressed by the Chinese Communist regime for more than 50 years. These extraordinary performing arts have been refined over China's 5,000-year history and its distinctive movements, rhythms, and postures, including tumbling and acrobatics, make Chinese classical dance unusually expressive and truly entertaining.

magazine said, "The Divine Performing Arts Chinese Spectacular is offering up 5,000 years of history to entertain and enlighten Australia this April. The show is the largest overseas Chinese performance in the world and just closed to a full house and standing ovation on Broadway in New York.

"Acclaimed choreographer Ms. Yung Yung Tsuai has been working with the Spectacular since its inception in 2004. She explains that Chinese classical dance is so unique because it has been passed down from ancient China when they emphasized loyalty, honesty, harmony of body and mind, and the belief in the divine. 'Chinese classical dance emphasizes this inner meaning,' says Ms. Tsuai.

"Ms. Tsuai says the Spectacular is a particularly meaningful production because over the last 100 years, much of China's rich traditional culture has been destroyed. 'People have lost their roots,' she says. 'Our performers want to wholeheartedly convey their culture and traditions to the audience to remind them, and themselves, of who the Chinese truly are.'

"The most striking parts of the program are the large-scale dances. It is quite a sight to see row upon row of gorgeous costumes and principled dancers moving together in a way that is disciplined but still fluid. Some of the richest performances are in the form of 'dance dramas' that depict the stories of ancient and modern struggles, with fairy maidens, brave warriors, and loyal souls. There are quite a few gentle reminders about virtue and honor running through the show, giving it more depth and soulfulness than perhaps one would initially expect.

"However, for Ms. Tsuai, what is unique about the Spectacular is not just the dances themselves but the infusion of all aspects of the show, like the costumes, music and set designs.

"The costume design took years of research into paintings, frescoes, and even statues to find the right authentic look. In one performance there could be up to 100 costumes on stage, all handmade and perfect to the smallest detail.

"The most unique part of the production is the multi-million dollar 3D digital backgrounds created exclusively for the show and that make the viewer feel they are not just looking at a painting or a performance, but are actually part of the scene!

"'Art is the food of the soul,' said Ms. Tsuai. 'If you see art that promotes good things, you will bring that home with you. That's what's important.'"

“Czech Minister of the Interior Expresses His Support to Falun Gong”