Czech Minister of the Interior Expresses His Support to Falun Gong

On March 19, 2008, the Czech Minister of the Interior sent a letter to the Falun Gong Association of the Czech Republic, giving his support to the Falun Gong practitioners being persecuted in China and condemning the atrocities committed by the Chinese Communist Party (CCP) against Falun Gong. The Minister expressed that the belief in the principles of "Truthfulness, Compassion and Tolerance" are important for co-operation and respect in any country and community.

The letter is as follows:

Dr. Ivan Langer
Minister of the Interior of the Czech Republic
Prague

I would also like to join the support for the persecuted practitioners of Falun Gong in China.

Therefore, I strongly condemn the atrocities committed by the CCP against Falun Gong practitioners. Freedom of belief is the basis of a free society. Before they take up the burden of being responsible for the freedom of their people, China cannot be taken as a truly developed country based on democracy. 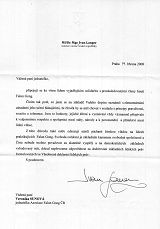