After Stockholm, the Divine Performing Arts' fifth showing in northern Europe drew to a close in LinkÃ¶ping, Sweden at the Concert and Congress Center on the evening of March 27. The audience rose from their seats in a standing ovation expressing their gratitude for an enjoyable experience. The performance attracted political dignitaries, artists, poets, and entrepreneurs, all of whom praised different aspects of the Chinese Spectacular. 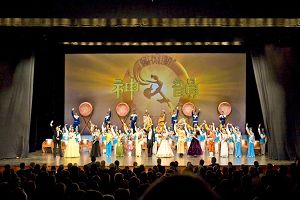 Curtain call at the sold-out Spectacular show in LinkÃ¶ping, Sweden 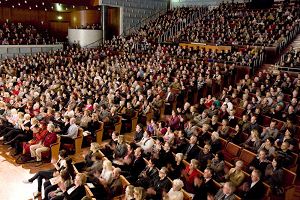 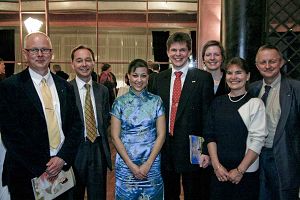 Finn Bengtsson (far left), one of seven Swedish Members of Parliament from Ostgota Lan who attended the Chinese Spectacular in LinkÃ¶ping on Thursday, March 27. Six of them are pictured here, with a Spectacular staff member in Chinese dress in the center

Many parliament members from Ostgota Lan resisted threats from the Chinese Embassy and refused to entertain its request to cancel the Spectacular. All seven parliament members who signed a letter to support the Divine Performing Arts attended the opening show in LinkÃ¶ping.

An official from the Chinese Embassy called Johan Lundgren, President of LinkÃ¶ping Culture Department in January 2008 and told him to cancel the show, threatening, "The relationship between China and the city of LinkÃ¶ping will be affected" if the request was not fulfilled. Around the same time, a similar phone call was also made to Madeleine Sjostedt, deputy mayor of Stockholm in charge of culture. Both Swedish officials denied the request. In a strong gesture of support, seven parliament members signed a letter of protest against the Embassy's attempts to stop the LinkÃ¶ping show.

After the incidents were exposed, Swedish politicians, the media and members of the public condemned the Chinese Embassy's contempt for democracy and human rights in Sweden, and they showed heightened interest in the Spectacular, as the Swedish people have always respected freedom of expression. As a result of this publicity and the marvelous nature of the Spectacular, tickets were sold out two weeks before the show.

Regarding the performance, Member of Parliament and Doctor of Law Andreas Norlen said, "Some features of the Spectacular include rich colors, exquisite choreography, and historic tales and philosophy."

"When the communists in China try to export their censorship to Sweden, we feel that we need to make it clear that this is not acceptable. We have to guard the freedom of speech. We are here to make a mark and hopefully make a pinprick in the Chinese dictatorship," said Norlen in an interview after the show.

MP Karin Granbom expressed support for the Divine Performing Arts and said it was a wonderful experience, "The bright and vibrant colors in 'Nymphs of the Sea', 'Snowy Mountain, White Lotus' and 'Mongolian Bowl Dance' left a deep impression on me."

Swedish federal MP Gunnar Axen who is also Chair of the Committee on Social Insurance said he liked all aspects of the Spectacular, "It's a very expressive but also a very harmonized show, presenting basic thoughts about philosophy, spirituality and religious views... in a very cultural way that is very, very inspiring." He said what the Chinese Embassy did was absolutely unacceptable.

Staffan Danielsson, an MP in the Defense Department and the Defense Drafting Committee said, "It was a blend of tradition--really interesting, really enjoyable, and very skillful." He said all local MPs wanted to watch the Divine Performing Arts, "The Communist Party is dictatorial in China, but now it's become even worse by trying to influence what we should and should not watch here in Sweden."

Bjorn Eriksson, governor of OstergÃ¶tland County wrote a letter to the DPA and its audience, "My friends, I am honored to welcome the Divine Performing Arts to LinkÃ¶ping. I'm sorry that I cannot join you at the performance tonight. I and many other Swedes admire the old Chinese culture and the way you are able to present it. In an open and democratic society like Sweden it is natural and stimulating to take part in cultural activities of different sorts. It is something that characterizes a democracy."

A manager from Nordea Bank based in Stockholm said it's an honor to have the Spectacular in LinkÃ¶ping. After watching the first half of the show, he said, "The performance is brilliant and innovative. The more I watch it, the more I like it. More international activities like this would definitely benefit LinkÃ¶ping."

"I liked the colors, the [dancer's] very special moves and of course the music, it's very, very nice," said Lars Hoffsten, a painter and musician who attended with his wife, Joanne, also a prominent artist, and their two daughters. Lars also said, "I really liked the way they moved in that dance. It was like they were floating on the floor. And as a drummer I liked this last part. I really enjoyed it," he said referring to Victory Drums.

Bi Rimdahl, a poet and philosopher was deeply moved and pleasantly surprised by the Spectacular, "I am a Swedish poet, and I write about the truth, compassion, tolerance, everything that was in the show, the freedom of the inner spirit--the right to the inner spirit. Amazing that that was in this show! Wonderful, fantastic! Fantastic message. Very beautiful." She also gave the singing and the lyrics rave reviews, "I love the text in the first song, saying how the goodness, the good, must win, which it always does, it always did. And we will punish the mean system and the goodness we'll celebrate."

Rimdahl also gave high marks to the hosts, saying they were very professional with a great sense of humor. They interacted with the audience and bridged the gap between the audience and the performers, "The Western host spoke perfect Chinese and the Chinese host spoke fluent Swedish; that in itself is very attractive."

Her husband, Ulf Lundberg, a teacher, also enjoyed the performance. He commented, "I loved the songs because the music was so beautiful. The music, dance and costumes together not only looked fantastic, they were also very educational."