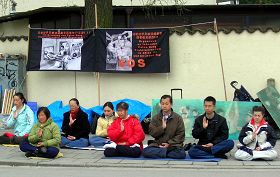 Falun Gong practitioners expose the persecution at the Chinese Embassy

The practitioners displayed banners that exposed the CCP's organ harvesting from living Falun Gong practitioners, and demanded that the CCP immediately stop its attempts to interfere with the Divine Performing Arts Chinese Spectacular. Many passers-by paused and took a look.

An older woman was shocked after she was told of the CCP's organ harvesting from living Falun Gong practitioners. She said, "The Communist Party dares to do anything."

A local man said, "The CCP's persecution of Falun Gong is indeed bad. Everybody should have human rights. I saw in the pictures that they used a hot iron to burn a Falun Gong practitioner's face. I feel really bad about this." He said it was hard to imagine that anyone could do such things.

A young man specifically came to join the assembly after he saw a large camera inside the Chinese Embassy's window, which was being used by the CCP to monitor the practitioners. He made a "victory" hand gesture. He said: "I want to show them that I support you!"

“Mainland Chinese: The DPA Should Present This Beautiful Show in China (Photos)”