Mainland Chinese: The DPA Should Present This Beautiful Show in China (Photos)

On the evening on April 12, 2008, Divine Performing Arts (DPA) performed its last Chinese Spectacular show in Canberra, Australia. The audience applauded warmly throughout the show.

This Beautiful Show Should Be Presented in China

Mr. He is in the construction business, and he came to Australia to visit his family. "I feel lucky to be able to see a great show from the DPA in my short stay in Australia."

"'The Drummers of the Tang Court' is very creative. I have seen many drum shows but this one was unique. The artists presented the drum's fighting power in a battle and that fit very well with the great era of the Tang Dynasty."

Mr. He added, "The show has Falun Gong content. It can be put on in this free society but not in China under the communist rule. The Chinese Communist Party always lies and does not allow people to tell the truth. The DPA should present this beautiful, traditional show in China so that the whole country can see it."

After the show, Ms. Zhou Yun told the reporter, "I liked the show a lot. The colors were brilliant and very traditional, and the costumes amazing." 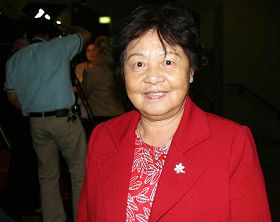 She said that she hasn't seen such a great dance show in many years. "'The Risen Lotus Flower' and 'The Power of Awareness' were very creative. The choreography made it easy for people to understand the message. In 'The Power of Awareness,' everyone applauded when the police perpetrators were driven away. The artistry was excellent. The artists' movements were so in concert and graceful in ' Water Sleeves.'"

Ms. Weng Meili came from Shanghai. She thought the show was very intense and the artists' every movement was so delicate, "Their movements blended well with the stage design. That was very creative. The hosts spoke precisely and with class. I liked their humor."

Ms. Weng commented on the show's message, "The program 'Fruits of Goodness' tells people they should be kind and teaches people modesty. To be able to connect with the divine is a precious blessing. If everyone can be like the young man in the 'Fruits of Goodness,' society will be very harmonious." 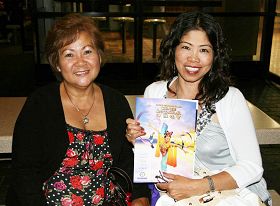 Anne (right) and her sister

Hope for the World to Get Better

Anne, a manager in an electronics business, came with her sister to see the show. They thought the traditions, costumes, choreography, and artists were perfect. "We are impressed. I have a lot of dreams. One of them is to make the world better and everyone happy. The show embodies this spirit," said Anne.

"Almost every nationality has legends like the story in the 'Descent of the Celestial Kings.' That's a little something God wants us to see. Those who wish to see will see it. I felt good when I listened to the music and saw the dances and stage design."

The Erhu Has a Very Oriental Flavor

"I think the Erhu has a very unique oriental power. One needs not only skillful fingers but a devoted heart to be able to play it well to move others," said Anne. "The Erhu artist performed with all her heart and it carried me away. My heart went with the music to a dream of mine. Every scene in the show was marvelous."