Geneva, Switzerland: I Never Knew That Chinese Culture Was So Beautiful (Photo)

(Clearwisdom.net) The premiere of the Divine Performing Arts Touring Company's Chinese Spectacular at the Theatre du Leman in Geneva took place on the evening of March 3, 2008. Many employees of the various international organizations in Geneva were in the audience. One of them was Dr. Naseeb Dajani, chairman and chief technical officer of the Global Harmony Foundation (GHF), headquartered in Switzerland. 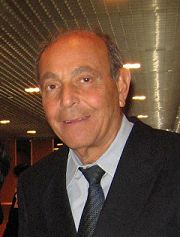 Chairman and chief technical officer of the Global Harmony Foundation (GHF) Dr. Naseeb Dajani was impressed with all the performers.

Dr. Dajani commented, "Very beautiful, charming, exquisite colors, fantastic, very classical. A fine arrangement of programs. I really liked the performance." "In particular, the dance about the persecution of Falun Gong ("The Power of Awareness") was very impressive. That the Chinese Communist regime is persecuting Falun Gong practitioners in China is truly tragic, but now the Chinese Communist Party can no longer suppress information. With the Internet and the rapid advance of technology, China must give its people freedom and respect all individuals, be they rich or poor, men or women. They must be respected."

The dance that left deepest impression on Dr. Dajani was "Nymphs of the Sea," and Erhu solo "Redemptive Suffering." He said he was particularly impressed by the lady who performed the musical instrument (Erhu). It was indeed very beautiful.

As a chief technical officer, Dr. Dajani said that he was impressed by the backdrop and the technology used in the production. He also found that the meanings expressed by the dances and songs, particularly by tenor Guan Guimin, to be excellent.

He noticed that many in the audience were captivated by the songs. "The overall effect was beautiful, charming, and graceful, allowing people to gain a deeper understanding of China and Chinese culture. It was well done! I'll come every year." He said that he did not know that the culture of China was so profound until he attended the performance. The cultures of Japan and Korea and many surrounding countries were influenced by Chinese culture.

He thought that everyone that participated in the show was extraordinary. "They are envoys of true Chinese culture. Truly extraordinary! This will bring change and hope to China." Even more so, people who attended the performance that day were talking about China, saying, "I never knew that Chinese culture was so beautiful and grand before I saw this show."

Mr. Shishuz is a staff member with the United Nations. When he attended the reception with the Divine Performing Arts performers, he was very pleased and told the reporter, "The show is excellent. I think I love every program. The colors are so briilliant, absolutely magnificent. Thank you very much."

When asked which performance was his favorite, Mr. Shishuz said, "It's too difficult to answer, please do not ask me such a difficult question. From the soloists to every performer on the stage, everyone did such a beautiful job. Thank you very much."

“Art Professor: It Isn't Enough To See It Just Once (Photos)”