The ability to appreciate art is not only for artists. Following are the comments of several business executives after they saw the third Chinese Spectacular by the Divine Performing Arts in Tainan in the evening on March 1, 2008.

General manager of a cultural and educational organization: "The Power of Awareness" awakens people's good thoughts

Mr. Lai Zongxing is a general manager of the Jin'an Cultural and Educational Organization in Taiwan. He and several employees saw the third show of the Divine Performing Arts in Tainan. He was especially touched by "The Power of Awareness." He shed tears a couple of times as he watched the show.

He indicated he thought that, while benevolence is a human inborn characteristic, people are not willing to show it due to the influence of acquired notions. "Many people choose evasion when facing wrong things. Actually, it does not show their true temperament but it is just a disguise. 'The Power of Awareness' gave the audience an opportunity to self-reflect and think good thoughts. Only when people show benevolence will there be justice in society."Mr. Lai also thought that the dancers were very professional and that the layout and backdrop of the stage were quite beautiful. He also admired the actors' facial expressions because it was evident that they truly enjoyed their performance.

CEO of a home decorating company: The show displays strength and beauty

Mr. Liu Jinkui is CEO of the "One Plus One Home Decorating Company." He was impressed with the excellent overall arrangement of the show and felt that it ranked as a large-scale, high-level show. The thought that the costume designs, combinations of color,s and scenery displayed strength and beauty. 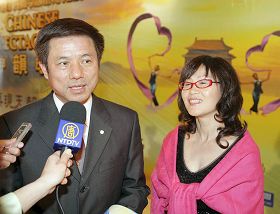 Mr. Liu and his wife enjoyed the third show of Divine Performing Arts in Tainan

Mr. Liu said that "The Loyalty of Yue Fei" brought tears to his eyes, and "Victory Drums" allowed the audience to experience the great momentum of a war scene.

"The Power of Awareness," according to Mr. Liu, showed how people behave when facing the persecution of Falun Gong practitioners, how their benevolence is awakened, and how, finally, their spirits are freed. Mr. Liu was impressed with the production company's diligence in arranging the program. He had high praise for the whole concept, scenery, layout, and dance performances.

Mr. Yu Gan is the general manager of the Cambridge Hotel. He particularly liked "Nymphs of the Sea." He said that the program fully displayed classic Chinese beauty. He also remarked on the excellent designs of the other programs and the skill of the dancers.

Mr. Yu recommended the show to several of his colleagues and they all came together. He said he would come to see the Divine Performing Arts next year if it is available, and he will recommend it to more people.

President of an electronics factory: I will come to see the Divine Performing Arts whenever it is in town

Mr. Zhong Biming from Pingdong is the president of an electronics factory in Tainan. Through a TV advertisement, he learned about the show. He accepted his friend's recommendation and came to see it with his wife. Afterwards, he was deeply impressed by the broadness and profoundness of five thousand years of Chinese culture. He was especially impressed by "Descent of the Celestial Kings" and "Drummers of the Tang Court." He said he would come to see the Divine Performing Arts show whenever it was in town and recommend it to his relatives and friends.

“Taiwan Showgoer: "I Was Almost Moved to Tears!"”