On February 26-27, 2008, the Divine Performing Arts staged three successful shows of the Chinese Spectacular at the Stadsschouwburg Theater in Antwerp, the second largest city in Belgium. The performance was a huge success, and audiences responded with overwhelming applause. Upon the conclusion of the last show, almost all members of the audience stood up, and waived and greeted the performers. The performers answered three curtain calls.

There were many Chinese from the mainland among the audience. Many had a strong and emotional reaction to the performance, sensing how it invigorated genuine Chinese traditional culture. 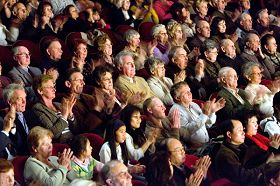 A packed hall for the Divine Performing Arts Chinese Spectacular 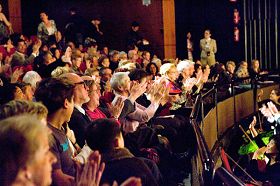 Audience at the Spectacular

"This is the best show I've seen in my life"

Mr. Xin graduated from Shanghai Foreign Language School and once taught Russian language in China. He left Shanghai to go abroad in 1990, and in 1992 began translating the Dutch dictionary. He completed it last year. After he watched the Chinese Spectacular at the Stadsschouwburg Theater in Antwerp on February 27, Mr. Xin repeatedly praised the Divine Performing Arts, and condemned the Chinese Communist Party's (CCP) continuous interference of the Chinese Spectacular in every city, in their attempt to destroy Chinese culture. 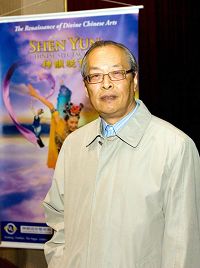 Mr. Xin was quite excited by the show: "I feel this is the best show I've seen in my life, the best cultural show. The Communist Party came to China when I was only ten years old, and then there was party culture afterwards. Today's show contains no party culture, and efficiently displays the characteristic of the Chinese culture, particularly the two numbers with drums. Those were extremely majestic, and truly displayed our Chinese nation's strength of spirit. Also, there were many gentle performances, exquisite numbers, that show people all over the world what our Chinese culture is like. It makes Chinese people very proud."

"Thank you for lifting my spirits"

A Ying, who came to Belgium from Jiangxi four years ago, could not stop praising the Divine Performing Arts. The Divine Performing Arts' pure compassionate, pure beautiful and righteous performance deeply touched her, "All the scenes are very beautiful, the stage design is beautiful, also the orchestra, too beautiful... I can't express it adequately -- I just feel it is indeed beautiful. I am very happy to see it today. Thank you, thank you for lifting my spirits." 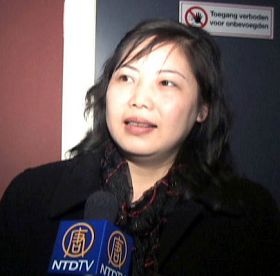 A Ying enjoyed the artwork and singing, and could not stop praising the Divine Performing Arts. "The backdrop is so beautiful, very very beautiful."

A Ying enjoyed the artwork and singing. She said she saw an announcement of the Divine Performing Arts show in the paper, and asked her friend to buy her a ticket. She spent three hours on the road, traveling from her city to see the show. "I have not experienced such beautiful enjoyment for such a long a time. Thank you Divine Performing Arts for bringing us such beautiful enjoyment."

She also said, "About Guan Guimin: when I was in high school, I used to hear him sing the theme song for a TV drama, very beautiful. I heard his voice today, and I am so happy. I am so glad to have seen Mr. Guan in person today. Also, Bai Xue's voice is beautiful too. I watched the singers with admiration."

A Ying also talked about her understanding of Falun Gong, "I did not know much about Falun Gong in China, and now I have a new view on Falun Gong. I feel that 'Truthfulness, Compassion, Forbearance' is indeed quite good, and an inspiration to me. I have now experienced the significance of 'Truthfulness, Compassion, Forbearance.' Understanding this aspect is truly wonderful...This show has surpassed my expectations."

Miss Chen said, "The performers are all very professional. It was all arranged very well, the music and dancers... they clearly spent a lot of effort. The program about Yue Fei ["The Loyalty of Yue Fei"] would make all Chinese feel national pride after seeing it."

Another student from the mainland, Miss Jiang said, "I really liked the first number, and that big drum... I just feel that they truly display Chinese national culture. I feel quite moved. The dance, 'Descent of the Celestial Kings' really has an imposing manner."

Ms. Li has been living overseas for a very long time. The Chinese Spectacular made her recall many of China's historic stories, "I like the dance about Yue Fei very much, it is very good. I think this is my favorite performance -- it is the real Chinese essence."

“My Leg No Longer Hurts--the Divine Performance Is Miraculous (Photo)”

“Paris Business Manager: There is a kind of serenity in the music (Photos)”