My Leg No Longer Hurts--the Divine Performance Is Miraculous (Photo)

Ms. Xu Feishan, who was in a car accident not long ago, attended the third performance of the Divine Performing Arts in Tainan with her husband. In order to attend the show, she overcame severe pain in her leg and leaned heavily on a walking stick. After the performance, Ms. Xu said that she had never imagined that the injured leg would feel light and the pain would be gone. She said that the performance, rich in divine Chinese culture, greatly moved her. She has a feeling of being saved. 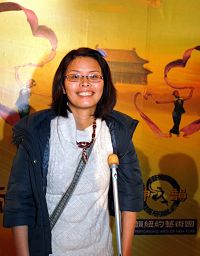 Ms. Xu was so happy to realize that the pain in her leg had disappeared after she watched the Divine Performing Arts Chinese Spectacular

The Divine Performing Arts Presents the Essence of Chinese Culture

The performance manifests a diversity of dances that are characteristic of different dynasties and regions, such as "Ladies of the Manchu Court" of the Qing Dynasty, and "Chopstick Zest" of the Mongolian prairie. Ms. Xu felt the essence of the Divine Performing Arts, which manifests the spirit of Truthfulness, Compassion, Forbearance, to revive the long lost traditional Chinese culture.

She thought that the dance, "Nymphs of the Sea" was so beautiful and the design of the backdrops so eye-catching that she couldn't help but wonder how the performance had been presented so effectively. "I am thoroughly impressed with 'Nymphs of the Sea.' It is really beautiful! I cannot imagine how they put it together, as if it was very simple. However, it looks really different."

he "Descent of the Celestial Kings"

After the performance, Ms. Xu said that she was very moved throughout. She had a feeling that traditional Chinese culture is back.

Speaking of the performances that moved her most, Ms. Xu mentioned the first, "Descent of the Celestial Kings" and the last, "Drummers of The Tang Court" along with "Victory Drums."

Ms. Xu told reporters that because she had recently been in a car accident, she had difficulty attending the Spectacular. However, after the performance, she said, "My foot felt light and comfortable while watching the show. It had a warm sensation." She continued, "It's amazing! In comparing the injured leg and the uninjured one, I felt heat off and on, and very relaxed. I felt a warm, then hot, rush of a current."

A Performance Worth Watching Again and Again

Ms. Xu often watches NTDTV's Asia-Pacific reports and learned how much Westerners like the Chinese Spectacular. After receiving enthusiastic recommendations from her friends, she was looking forward to the arrival of the performance by the Divine Performing Arts. She also said that Chinese language is becoming increasingly popular in foreign countries. Even Western people have a great appreciation of Chinese culture, so how could Chinese people give up the opportunity to learn more about their own culture?

She suggested that everyone try to see the performance. She said that every time you see it, you can gain more insights into the inner meaning of the performances and learn more about Chinese culture. She ended the interview with a heart-felt recommendation: "The Divine Performing Arts Chinese Spectacular is worth watching again and again!"