Taiwan: People from Different Walks of Life in Yunchia Are Surprised and Moved by the Wonderful Show (Photos)

(Clearwisdom.net) On March 20, 2008, the New York Divine Performing Arts' last two shows of the Chinese Spectacular in Chiayi played before a full house. Audience members from many different walks of life shared their positive impressions and happiness at seeing the performance.

Coming from a town famous for its Arabic coffee - Gukeng, a rural township in eastern Yunlin County, first-prize-winner of the National Chiaochih Pottery Yewang Prize, Cai Xianyong said after watching the show that it was an amazingly colorful Chinese cultural performance. He remarked that some of the dances appear to be similar to the designs in the Dunhuang Caves. He said that the movements and postures revealed pictures of flying celestial beings and spoke of the belief in Buddhas and gods that exist in other dimensions. He suggested that all these are elements of a divinely-inspired culture.

Cai Xianyong expressed deep admiration for the dance, "The Ladies of the Manchu Court." He said that the dancers wore such high heels, but were still graceful and displayed great charm. When compared to Japanese wooden clogs, this type of footwear showed a completely different cultural development. It presented to the audience wonderful a sight. He told us that he definitely looked forward to more shows by Divine Performing Arts in the Chiayun area. He felt that the local culture would blossom after experiencing Divine Performing Arts.

Ms. Yaqi, who attended the show with him, said that she felt very fortunate to see this show. She said that the artistic culture of the performance unfolds in an unusual, profound and touching manner. She said, "Especially the first scene, 'Descent of the Celestial Kings,' seemed to show the truth. This scene predicted changes in the human world." She continued, saying that she believed that all people have an understanding side, and the conscience of all sentient beings is awakened by the dance. She felt that the Divine Performing Arts' performance tells people that its performers treasure everyone. She hopes that all Taiwanese will have the opportunity to see the Divine Performing Arts Chinese Spectacular in the future.

Chiayi County Government Education Section deputy chief Xu Xiulong said: "I did not feel tired during the almost two-and-a-half-hour performance this evening. This is because of the compassionate and exquisite performance by the artists. I felt full of vigor and energy. The dances made me feel as if I was transported to a fairyland. The overall stage effect gave the impression that I joined the dancers and I would have not hesitated to remain there the entire night. The first scene moved me greatly. It told me that one should correct one's behavior throughout one's life and thus raise one's level." 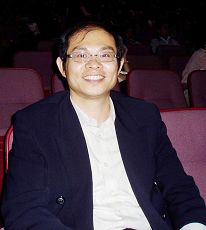 Xu Xiulong said, "We should use as an educational method the spirit of 'Truthfulness, Compassion, Forbearance' with our students. If the students are given such traditional moral teachings, it wouldn't be difficult to guide students and have them walk the proper path. It would also be beneficial towards establishing the good moral character of student and shape the culture of the future society.

Ms. Chen Yueyun, a retired senior reporter, shared that her innermost feelings were touched. The scenes displayed harmony, patience and tolerance, all attribute that are most lacking in society. She believes that if everyone could see the dancers' grace, power and beauty, begin to understand each other and be willing to hold kind thoughts, this world would be incomparably wonderful and everyone would have a happy and joyful life. 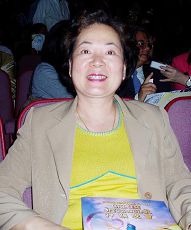 Ms. Chen said, "This show has the undertone of a divinely-inspired culture. It also clearly told us that everyone should hold God in his/her heart. He is the power that guides us to elevate, teaches us to be kind and tells us that we should treat all things with kind thoughts. I believe that once we develop these attributes, we certainly will have a wonderful life, where kind thoughts reign and one is tolerant."

Ye Xiuwen of the Chengzheng Land Administration Office and his wife Xiao Huiqi described their feelings from watching the Divine Performing Arts Spectacular. His wife encouraged Ye Xiuwen to bring their close friends to Chiayi to enjoy the final show of Divine Performing Arts in Taiwan. Besides feeling that his mind was cleansed, he also experienced many surprising moments in the performance. It was as if he forgot he was watching the show and simply immersed himself in its cleansing and purification. 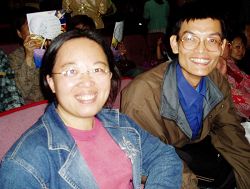 Ms. Xiao Huiqi said that after watching last year's Divine Performing Arts show, she looked forward to this year's performance. After seeing the opening show in Tainan, she felt as if she needed to see the show a second time. She said that it is one's good fortune to be able to see more of these performances.

“Design Professor: The Chinese Spectacular Is Soothing and Inspirational (Photo)”