(Clearwisdom.net) Li Sung-Mao, whose teacher is Liang Jingshan, is a renowned black-and-white photographer in Taiwan as well as in mainland China. On March 16, Li Sung-Mao and his wife attended the fourth performance of the Divine Performing Arts Chinese Spectacular in Taipei. 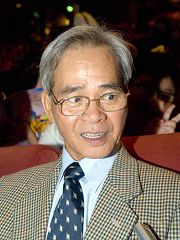 'You will regret it for the rest of your life if you miss it.' said Li Sung-Mao, a renowned black-and-white photographer in Taiwan as well as in mainland China

On the morning of March 16, Mr. Li returned to Taiwan from a trip to Yunnan. In the evening, he was still hesitant to attend the show, but when he was interviewed during intermission, he said, "Each and every number is fantastic. I'm so fascinated that I do not want to leave my seat. I am so lucky to have come!"

When the show ended, he accepted a telephone interview and said, "I would have regretted it all my life if I had missed such a great show!" He praised the exquisite stage design, the colorful costumes, the appropriate use of color, and the dedication behind the production. He said that he was pleased to have been able to see the show and summarized the entire performance with one adjective: "impeccable."

"Descent of the Celestial Kings" realistic

Mr. Li said that the stage design was the best that he had ever seen. "The dry ice effect in 'Descent of the Celestial Kings' not only highlighted the heavenly scene for the audience, but also reduced the distance between the audience and stage. People felt as if they were personally in the scene."

The backdrop presented the contrast between light and dark, Good and Evil

Both Li Sung-Mao and his wife said that they loved every performance. When he was asked which one was his favorite, Mr. Li said that "The Risen Lotus Flower" was impressive. As a professional photographer, he was impressed that the backdrop and the stage changed with each number, creating a contrasting display between light and dark - between good and evil, accentuating the contrast between the darkness of the vicious police and the brightness of the heavenly glory. He said that the visual effects transported the stage beyond time and space. He thought that it was really remarkable.

When he saw the dance about the persecution of Falun Gong practitioners in prison, he said with emotion that true faith should be respected. "Those in power do not have the power to deprive people of their thoughts." He said that he was happy to reside in Taiwan where people have human rights.

The Stage is layered, the costumes are bright and colorful

Li Sung-Mao said that all the arts are actually intertwined. Chinese painting uses pen and ink; photography uses optics, while the stage of the Divine Performing Arts is layered, orderly, but not presumptuous, which conforms to the traditional spirit of black-and-white photography (which is his specialty), reflecting the flavor and beauty of Chinese culture.

The couple was surprised at the combinations and colors of the costumes, including the various features of the costumes from different nations. Li Sung-Mao repeatedly praised the high quality of the performers.

The stage and the performers merged

As someone who loves to see opera and artistic performances, he said that he had never seen any performance like that of Divine Performing Arts. "Traditional stage background is not three-dimensional. The backdrop of the Divine Performing Arts not only changed with different pieces, but changed with the content. The scenes opened from the stage and extended beyond the stage. The backdrop and the performers were interchangeable: sometimes the performers were more prominent, sometimes the backdrop was primary. The performers and the stage merged."

When talking about the dance, "The Power of Awareness," which depicted the importance of justice for human harmony, Li Sung-Mao recognized the lofty spirit of the performance. He said that although a large number of performers were on the stage, the layered stage design was evident in the costumes (contrasting the darkness of the persecutors and the lightness of the kindhearted people), the backdrop (contrasting the gloomy sky when the villain bullied the weak and the bright scene after the villain fled), and the presentation of the music. "We could see what was primary and what was secondary and together they formed a harmonious whole."

Another kind of poetic charm

Mr. Li loves photography and likes to capture nature and poetic landscapes. He described the performance as another kind of poetic charm expressed and displayed in a different way.

Just the name--"Divine Performing Arts"--is awesome, in Mr. Li's opinion. "The performers' movements, their expressions, the entire stage, and the exquisite costumes are all impeccable--truly a divine performance. Such a high standard performance should be promoted extensively. It manifested the real connotation of Chinese culture. The director behind-the-scenes is really great!

“Businessman from Mainland China: My Heart Feels Clean and Clear After Seeing the Show”

“Design Professor: The Chinese Spectacular Is Soothing and Inspirational (Photo)”