Former Deputy Head of the Department of Justice: It's an Honor to Attend the Divine Performing Arts Show (Photo)

Mr. Cheng Zhongmo clapped after each program. During intermission told the reporter, "I think this show is excellent. I have liked all the performances. I especially liked the 'Drummers of the Tang Court.' It was full of energy and very uplifting." 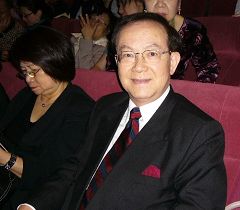 Mr. Cheng Zhongmo, the Foundation Director of the Taiwan Law and Judicial Policy Research Center and a former chief justice, had high praise for the Spectacular.

Mr. Cheng, who works in the field of law and judicial research, was especially moved by "The Risen Lotus Flower." He said, "This program promotes human rights from a 'natural rights' standpoint. It showed how basic natural rights are protected. I was truly moved by this program."

Mr. Cheng praised the show for demonstrating the inner meaning of human rights by using art and culture in a deeper and more refined way. He said, "I think the performers expressed the inner meanings very clearly so that even ordinary people can have a better understanding of human rights, whereas they might not be able to understand some of the theoretical human rights terms. This program portrays people's actual lives. It can enable people to realize how valuable human rights are to them. It is very exciting. If human rights can be guaranteed, people will be able to express their dignity. I think this is a very good thing to point out."

He continued, "I think that it would be really an honor for me if I could call attention to this artistic performance while I am following my political pursuits."

Mr. Cheng Zhongmo said he has rarely seen a show of this quality in Taiwan. He said, "We should promote this kind of performance. It is really great if a show can express a principle or a belief through a performance. This kind of expression is very clear. People will understand it when they see it. The performance is very refined. It's really great to see this expression of 'Truth, Compassion, and Forbearance.'"