(Clearwisdom.net) At 10:30 pm on March 14, the Divine Performing Arts performed its first show at the theater of the International Convention Center in Berlin. At the end of the performance, the audience offered a long, standing ovation. The performers answered three curtain calls and the audience responded with overwhelming applause.

Among those in attendance were Christoph Meyer, federal Parliament member, vice president of the Free Democratic Party and spokesman for interior policy and culture; Senator Josef Winkler, several district deputy directors in Berlin, many ambassadors, dignitaries, artists and musicians, businessmen and people from all walks of life. 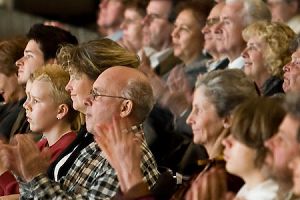 German Senator: "I can tell the performers have been well trained"

German Senator Josef Winkler praised, " I can tell the performers have been well trained. I like Chinese traditional dances very much. The performance perfectly integrated traditional culture, spiritual meaning and political aspiration. The dance that depicted the current situation in China ("The Power of Awareness") was highly artistic."

Diplomat: "Applause reflects how performance was recognized and welcomed" 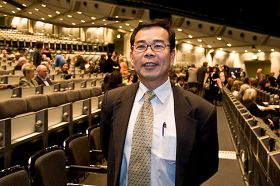 Chen Youshun, Bureau Chief of the Taipei Economic and Cultural Office in Berlin

Chen Youshun of the Taipei Economic and Cultural Office in Berlin said, "I watched the performance of the Divine Performing Arts for the first time and it's really wonderful and enjoyable. The performance was enjoyable from the perspective of stage effect, rhythm, music, costume design, professional proficiency, and techniques. ... I was deeply impressed by the drum dance. The Tang Dynasty drums were played to represent the grand Chinese majesty and might. It's very good. After the first half of the performance I really did not want to leave!"

Chen continued, "I grew up in Taiwan and have seen a lot of Chinese dances. However, the performance of the Divine Performing Arts was carefully designed and planned to integrate with modern life, and it's very joyful. I can not think of better words to describe my feelings."

The Collie couple: "Beauty of the performance is beyond description" 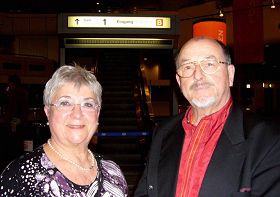 He stressed, "The costumes were very beautiful! There is no better performance than this!" Gisela Collie added, "It's impossible to describe how beautiful it is."

Gisela continued, "The performance was very good. I was deeply enthralled by the dances and color. My eyes could not catch every scene. It's so beautiful. The Tibet dance, "Snowy Mountain, White Lotus" performed very well. However the dance of "Nymphs of the Sea" was really excellent to the eyes and mind! I liked it very much!"

"I was really touched! It's so beautiful." 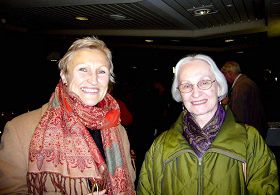 Barbara said, "I was very touched by the performance, and I have never seen a performance like this. I feel the Erhu is the most beautiful instrument, it's so wonderful and extraordinary."

"I was amazed by the combination of the fabulous backgrounds and the classic dances. I was very impressed! I also liked the gorgeous costumes. The most soul-piercing music is the Erhu song "Redemptive suffering." Such a moving melody from a two-stringed instrument! It's extraordinary! It is so beautiful; I was totally moved!"

Barbara also expressed her gratitude to the hosts. She said, "I'm very happy about the hosts of the Spectacular. It's really a good idea that the female host, who is Chinese, speaks German, while the male host, who is a Westerner, speaks Chinese. Furthermore, He speaks Chinese very fluently. Well, of course we cannot judge him (because we don't understand Chinese language.)..." Dora interrupted, "Although I cannot judge him, I can feel that he speaks such wonderful Chinese." Barbara continued, "Yes, me too. I really admire him."

"It's really important to tell people what is happening in China right now."

"It's vital to tell people around world what is happening in China right now. To do so, people overseas can know the truth about China and maybe they can help to find a resolution to the problems inside China."

"I can understand the Chinese culture much better now. It broadens my perspective."

An elementary school teacher specializing in German and Math told the reporter, "I loved the performance of the Spectacular! I think that the "Mongolian Bowl Dance" is my favorite. Their movements were so elegant and graceful. I've never seen this before. I didn't know anything about Chinese culture before this."

"The Music, the costumes, and the dances...every single thing is perfect." She said she would like to recommend the Spectacular to all her friends.

“Former Deputy Head of the Department of Justice: It's an Honor to Attend the Divine Performing Arts Show (Photo)”