The three shows by the Divine Performing Arts (DPA) in Kaohsiung have had a far-reaching influence in educational circles. The essence of China's long history radiated with the power and beauty of a great culture. School principals and college presidents in Kaohsiung praised it with one voice.

Dr. Chu Yuan-Hsiang, President of Shu-Te University, told the reporter, "Divine Performing Arts presented the essence of Chinese culture and philosophy through dance and music. It is the easiest way to introduce foreigners to Chinese art and culture. It is a truly beautiful and successful show!" He strongly recommended the show and was impressed with the fascinating background designs.

Dr. Chu said, "The show not only unfolded the Chinese art of aesthetic values, but also was very educational. It was rich in information and conveyed the true story of Falun Gong and truly beautiful ideas through dance and music. I think it is more powerful than condemnation and criticism." 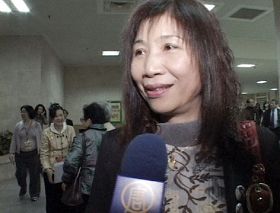 Ms. Chen Chun-lien, Principal of Feng-Shan Elementary, praised the show as splendid, striking, and conducive to meaningful thinking. "The colors and elegance of the costumes could only be described with the word 'incisive.'" Ms. Chen said. "The celestial dancers were as gentle as water and the drummers as vigorous as strong wind. Every dance had a matching background. The scenes were so vivid and magnificent! What the DPA presented was the powerful beauty of a great culture, which naturally radiates from China's long history. The show opened a new window for me. It is wonderful!" 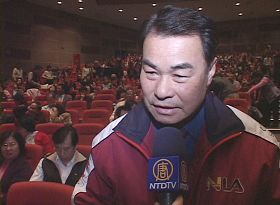 Mr. Tsen Hsien-hung, Principal of Niaosong Elementary, loves horticulture, painting, literature, and science. He saw the DPA show and shared his views as an educator, "The show included the beauty of art, religion, and animation. It was a satisfying and perfect entertainment for the audience! From the beautiful dances to the story about the loyalty of Yue Fei, every performance influenced and inspired. I also saw the unification of the nation and the promotion of justice. We should face the persecution of Falun Gong in Mainland China and call for it to stop. It is very significant for the DPA to call for unity and to promote the Chinese culture through music and dance. I appreciate all the DPA has brought us!"

“Vienna Audience Member: "I Must Pay My Respects to These Artists" (Photo)”