The Divine Performing Arts New York Company presented their first show in Kaohsiung, Taiwan on March 4, 2008. Many people from the education sector attended the show. This moving and amazing show is not just an artistic performance, but conveys an innate spiritual message. 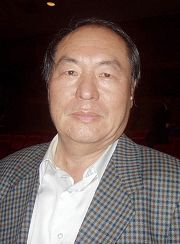 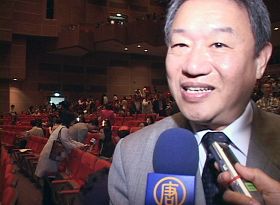 According to Mr. Li Liang-mo, principal of Pingdung High School, the Divine Performing Arts Chinese Spectacular is a performance that does not come by often. The show included an exquisite Erhu solo performance entitled Yuan (Predestined relationship), the playing of which is truly a wonderful artistic achievement. The show also encompassed the dance, "Chopstick Zest" which originated from the prairies of Mongolia, and "Drummers of the Tang Court," which displayed the bold and unconstrained characteristics of men through a traditional art form.

Mr. Li said, "I think this is a very good show - a real treat for the ears, while we also see the beauty of the dances. We should really promote this; it really presents the true essence of Chinese Culture."

Mr. Li also thought that while the artistic performance allowed people to experience real beauty, it was also educational. He said, "We work in the education sector, and truly hope that more people, or more of our youths and students, will be able to see it." He thought the show would be a great influence over students on the spiritual level.

"Each of us in the audience have been deeply moved"

Mr. Gong Rui-chang, principal of Cheng Shiu University of Technology, said that it is a rare opportunity to attend the Divine Performing Arts Chinese Spectacular. He much admired the stage design, costumes, musical accompaniments, and solo performers for their professional caliber. He also said the show was a perfect blend of truthfulness, compassion, and beauty.

"The various historical legends portrayed, and the different content of the show have all been perfectly presented through dance and music. Each one of us in the audience have been deeply moved, and have retained a deep impression," said Mr. Gong.

Mr. Wu Ke-de, principal of Fanhua National Primary School in Pingdung, praised the show as a superb artistic achievement, filled with special charm. Principal Wu said, "Everyone wants to advance in the world; that's why society seems very unruly. What we are missing is a central ideology." He felt, "The Divine Performing Arts Company has used classical dance and truly elegant music to provide a refreshing cleansing to our polluted hearts. It has delivered the living water into my heart."