New York: "I Have Never Seen Anything Better Than This!" (Photos)

(Clearwisdom.net) In the afternoon on February 3, 2008, the sixth Chinese New Year Splendor show was performed at Radio City Music Hall in New York City. The audience enthusiastically praised the show. 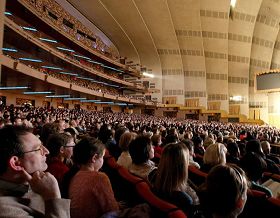 In the afternoon on February 3, 2008, the sixth Chinese New Year Splendor show was performed at Radio City Music Hall in New York City 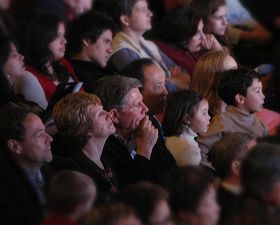 "I have never seen anything better than this!"


Tammy Gruttadauria, an administrative assistant, learned about the show on TV and brought her friend, college student Inna Zenis to the show. Inna said, "I have never seen anything better than this! The artists are very talented, and I would definitely go to a show like this again." 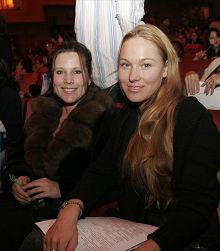 Tammy and Inna both said that they liked everything in the show. "Every program is great. The songs are graceful and the dances are beautiful. I am so glad that I came here," said Inna, "You can understand what the artists are trying to convey through their body language."

Social worker Adela Rodriguez lived in Shanghai for six months and enjoyed it greatly. Her husband Jerry Rodriguez visited her there, and he bought her tickets to the Chinese New Year Splendor show after they came back to the U.S. as a surprise gift. 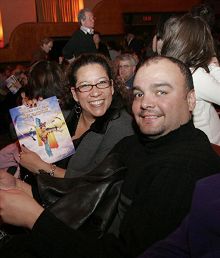 Adela said, "The show was amazing; it showcased Chinese culture and history. I liked "The Risen Lotus Flower" and the Tang drums. The show used dance to present culture. The costumes and the backdrop are vivid and make you feel like you're in a village in China."

Jerry is a website administrator. He said that the show is a great chance to learn about a different culture, "I just came back from China several months ago, and (watching the show) was like continuing my journey in China."

Adela said, "I feel the show truly represented China. I felt like I was back in China again."

Ida Rowe, a school assistant principal, came to the show with her husband, daughter, and granddaughter. Ida thought the show was educational, "The colors were magnificent and enjoyable, and the programs were very educational. They told many historical stories. It's great that we can celebrate a different culture together. I also liked the backdrops and the fan dance. I especially liked the presentation at a spiritual level." 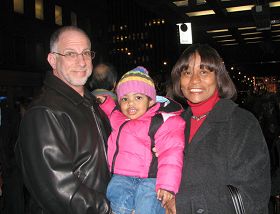 Ida Rowe (right) and her family

Jeff Rowe, Ida's husband, said, "The English translation on the screen helped us understand what was happening. I enjoyed the Tang drums. We would definitely come again."

"The show is even better than we imagined." 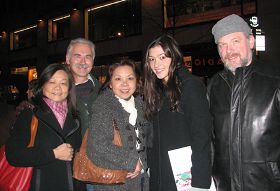 Mr. and Mrs. Kendzior (left two) and the Schlingmann family on the right.

After the show, Gilbert said that the show was excellent, "I liked it very much. This is the first time that I've seen the Chinese New Year Splendor. We all enjoyed it a lot."

Mimi was proud of the Chinese culture presented in the show: "I liked it better than the Chinese programs I watched when I was a child." Inga said that her favorite program was "Nymphs of the Sea."

“Epoch Times: Chinese New Year Splendor "Will Have an Impact on My Future" (Photo)”