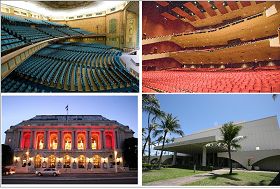 Theaters in Los Angeles, San Diego, San Francisco and Honolulu where DPA shows will be performed starting from Dec. 26. 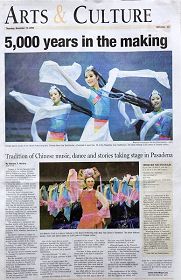 The Pasadena Star introduced the DPA shows with full page coverage on Dec. 18, 2008

The DPA's nineteen shows in seven cities in the western U.S. in early 2008 were a great success. The unique and gorgeous background, the splendid costumes, the heavenly music and the superb dancing often left the audience mesmerized. Fourteen thousand people from the Bay Area alone enjoyed the last journey into the five-thousand-year history and culture of China.

The upcoming thirty-five shows will bring a brand new program to the eight cities, offering a cultural extravaganza of dance dramas, ethnic dancing, vocal performances, and instrumental music. In recognition of these wonderful shows and the accompanying revival of classical Chinese culture, a number of political leaders in the Western U.S. sent their congratulations. 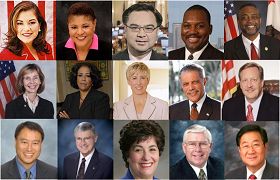 Members Resolution No.106 by Assembly Members Mike Davis and Curren Price said that "they draw the special attention of the people of the great Los Angeles community and the State of California to the 2009 Chinese New Year Spectacular to be performed by Divine Performing Arts from December 30, 2008, through January 4, 2009, and applaud the enjoyment and invaluable contributions the performing company has made to the world of entertainment."

Representative Loretta Sanchez said in her letter, "The 2009 Divine Performing Arts' Chinese New Year Spectacular is the largest Chinese New Year celebration event outside of China. The event highlights the Chinese culture through an extraordinary world-class production that brings together over 500 performers to depict the classic battle between good and evil and ancient culture." She also recognized the Chinese American community for their outstanding accomplishments and leadership, and commended the NTDTV "for providing quality programming and their leadership in organizing this event that celebrates the Chinese culture."

Speaker of the California Assembly Karen Bass said in her letter, "The Divine Performing Arts Group's show this year represents a truly unique window into ancient Chinese myths and culture, and it serves to bring all Angelenos together through art."

Assemblyman and Chairman of the Assembly Select Committee on International Trade, Van Tran, whose grandmother is Chinese, said in his letter, "This celebration symbolizes the bringing over one hundred of the world's foremost classically trained Chinese dancers, choreographers, musicians, and vocalists. You have played a vital role in promoting an understanding between Chinese and Western societies. I firmly believe that the Chinese people outside China have benefited from your contributions to the Chinese culture. I also hope to see some of the benefits making there way China when I visit there in April."

“Stage Designer: The Spiritual Component of Chinese Culture Is Very Meaningful for Me (Photos)”

“Practitioner Got out of the Detention Center After Hunger Strike”