Stage Designer: The Spiritual Component of Chinese Culture Is Very Meaningful for Me (Photos)

(Clearwisdom.net) Sandra Angotti was a theater stage designer at the University of California San Diego before she became a police officer. She commented that, from her experience as a stage designer, the use of the animated backup by the Divine Performing Arts was quite unique. During the show's intermission, she told the reporter that she and her friends had just realized that other Chinese shows failed to represent real Chinese tradition and had no concept of Buddha, compassion, or meditation. She said that the Divine Performing Arts show contained these aspects along with a very important message. "I love it. I am especially touched by the spiritual component of Chinese culture--this is very meaningful for me." 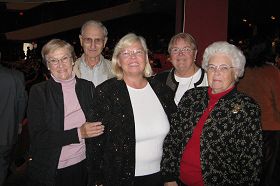 Sandra Angotti (center) and her friends

Ms. Angotti said that she thought every part of the show was good and she loved everything. "The singers were great and the dance pieces were exceptional. However, I was touched the most by the piece that portrayed current China--the one in which policemen arrested a person who was meditating ("Persecuted on a Sacred Path"). It moved me to tears."

Sandra's friend Joyce Wurm told the reporter that she had a great time as well. "I love this show, especially the colors and the way they use color. It was very beautiful. I was also fascinated by the sophisticated movement of the dancers' hand and shoulder movements. The movements in ballet are relatively rigid and firm, while classical Chinese dance is more fluid and gentle. I enjoyed this very much."