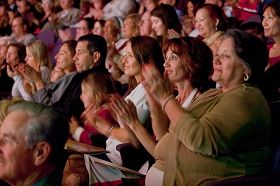 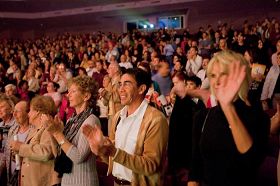 Pastor Richter said that the songs had extraordinary meaning, and that he truly enjoyed them. He remarked that the DPA show made people happy, and that this was reflected in every aspect of the show.

Lois said of the lyrics "The world is poisoned by atheism," explaining that atheism has brought many painful miseries to the world. She was pleased to note that east and west have many similarities in spiritual belief. People obtain power from belief to help them pass through times of hardship.

The pastor said that everyone should have belief. It is meaningful for everyone to have belief, no matter Christian or other belief. People should pursue truth and conduct themselves according to truth to have permanent peace in their hearts.

"We will come again next year, definitely. We will tell others about DPA show."

Mr. Irving Press is a retired entrepreneur. He said excitedly that the show brought a warm spring-like feeling to him, and gave him a happy heart. His worries melted away in the beauty of the performance so he could enjoy the show in its entirety.

Mr. Press brought his whole family. He said that the dancers were elegant and beautiful, and that the music was melodious.

"The performers did so beautifully. I thoroughly enjoyed the show. The drums and dancing were all extraordinary."