The Divine Performing Arts (DPA) Touring Company concluded its three shows, over two days, at the Broward Center for the Performing Arts in Fort Lauderdale, Florida on December 20, 2008. With a focus on traditional Chinese culture, DPA adopted art forms that express beauty and kindness, including Chinese classical dance, folk dance, and vocal performances. Integrated with dazzling costumes and state-of-the-art animated backdrops, the performances showcased the glorious Chinese culture to the audiences' amazement. 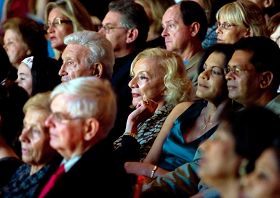 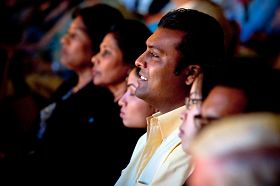 Musician Matthew Placido was also impressed by the lyrics and conveyed a sense of self-discovery. He said, "You can discover things about the world, and then you can discover things about yourself: Truth, knowledge, you can discover-- and I got that. Even the music puts it across, this sort of an inspiration of a new perspective on life, of a new way of living, and a new way of looking at the world. And he sang it perfectly." He said of the music, "Hands down, you know, the music was first rate."

Eleanor Hannan, a fashion columnist for the South Florida Sun Times, attended the DPA show for a second year. She said, "The elegant dance movements are incredible. Those performers are graceful and charming. The choreography is marvelous, and the director must be outstanding."

Cathee Connor and Sherry Carr attended the show together. Ms. Connor teaches ballet and jazz, and Ms. Carr is a musician. Ms. Carr said that this was the first time that she has seen a classical Chinese dance performance. She found it to be unique, expressive, and dramatic, with deep cultural meaning. She called the performers' movements "flowing," "nimble," and "gentle."

Ms. Connor said, "The music was amazing. I've been to China twice, and I was entertained with some Chinese dance performances each time. But this DPA performance was top notch. What the show presented--the past, the future, the sky, the oceans, a single stone and a tree--was serene and peaceful. Coupled with the spirituality that was involved, it was beautiful and a hope for the future."

Pamela Adamus is a manager of the international sales department at a major steel production company. She was excited after the show. She called the performance "fabulous" and "wonderful." 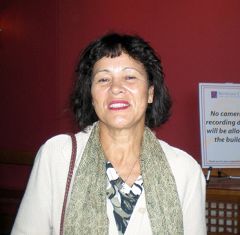 Ms. Adamus said that she had never seen such a dance form in which the dancers seem to fly in the air, which she found elegant and joyful.

She continued, "The Truthfulness-Compassion-Forbearance that we saw in the show transcends nature, points out a path for people, and guides people on how to live a happy life in this world." She stressed, "When we know how to face reality in life, that determines our future direction. I believe in destiny. When people do good deeds, they will change their fate."

Financial analyst Margarita Peraha brought her seven-year-old daughter to the show. She said, "I think tonight's show was really a great performance. It was the first time that I saw Chinese classical dance, and I think it's amazing, including the costumes, music and choreography. I liked the dance dramas 'Mulan Joins the Battle' and 'Legend of the Brush,' because the messages they conveyed resonate with everybody."

Miriam Garibaldi is a professor of accounting and commerce at Atlantis University. She enjoyed the show and found it amazing. She especially enjoyed the costumes, the beautiful colors on the stage and the impressive backdrops.

Wang Ling came to the United States five years ago from Xi'an, where she was a nurse. She said that it was the first time she had seen such a traditional Chinese culture performance in or outside China. She said that it reminded her of her family in China. She particularly liked the dance drama "Persecuted on a Sacred Path." She said, "It's touching, and real. My brother-in-law is a Falun Gong practitioner, and I know clearly about the Communist Party's persecution of Falun Gong. The dance gives people inspiration and confidence. Righteousness will conquer evil, that's for sure." 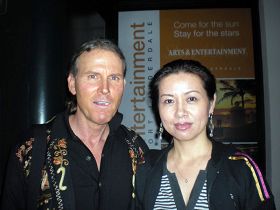 Ms. Wang said that she couldn't wait to call her relatives and friends in China and tell them about the show.