Philadelphia: "I Am Proud of Being Chinese" (Photos)

(Clearwisdom.net) On December 20, Divine Performing Arts (DPA) held the second show of the 2009 world tour in Philadelphia. During the intermission, Mr. Zhao, a Chinese living in Philadelphia, told the reporter how much he and his daughter loved the show.

Mr. Zhao: "It is better than I expected. Everything is traditional."

Mr. Zhao said, "I've heard about DPA before, but I didn't think they were this good." He brought his daughter to show because she was born in the U.S.A., and he wants her to know more about Chinese culture. "On the way to the theater, my daughter kept asking what kind of show it would be. I told her to find out for herself. Actually I didn't know either," Mr. Zhao said.

"It is better than I expected. The costumes, music and dance were all traditional. It is my first time to see such a large-scale show in America. The show is excellent. I've seen shows by performing arts groups from China, but none of them can be compared to this one," said Mr. Zhao.

Mr. Zhao likes art. He said "We are losing the traditional stuff in China. People cannot appreciate the traditional arts, nor do they know about them very well. This show demonstrated our 5000-year-old culture. I asked my daughter, 'Aren't you proud of being a Chinese?' The U.S.A. only has a 200-year-old history, but our ancestors had such beautiful culture several thousand years ago." 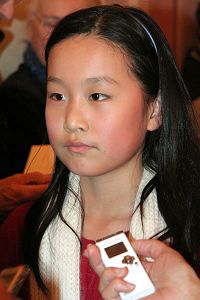 "I am proud of my culture," said Angela Zhao.

Angela Zhao, Mr. Zhao's 10-year-old daughter, was born and grew up in America. She was amazed by the show. "It is lively. I am proud of being a Chinese," she said.

Mr. Zhao believes that show is attractive to Westerners too. "It is great that Americans and Chinese kids, who grew up here, can learn about China through the show. Some of them knew nothing about the Chinese culture. They will be amazed once they see it," he said.

Mr. Zhao is a Christian. He said, "My belief is different than Falun Gong. But it doesn't matter. Everybody should have freedom of belief." He added, "Christianity, Catholicism, and Falun Gong are all very different from Communism. We are far away from Communism."

Mr. Zhao is a leader in the local Chinese community. He said that he would recommend this show to his Chinese friends.