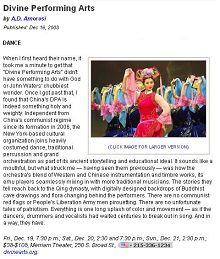 A.D. Amorosi wrote: "When I first heard their name, it took me a minute to get that "Divine Performing Arts" didn't have something to do with God or John Waters' chubbiest wonder. Once I got past that, I found that China' s DPA is indeed something holy and weighty. Independent from China's communist regime since its formation in 2006, the New York-based cultural organization joins heavily costumed dance, traditional percussion and grand orchestration as part of its ancient storytelling and educational ideal. It sounds like a mouthful, but what struck me -- having seen them previously -- was how the orchestra's blend of Western and Chinese instrumentation and timbre works, its erhu players seamlessly mixing in with more traditional musicians. The stories they tell reach back to the Qing dynasty, with digitally designed backdrops of Buddhist cave drawings and flora changing behind the performers. There are no communist red flags or People's Liberation Army men pirouetting. There are no unfortunate tales of patriotism. Everything is one long splash of color and movement -- as if the dancers, drummers and vocalists had waited centuries to break out in song. And in a way, they have."

“Photos: Strong Contrast between Mainland China and Taiwan in Treatment of Falun Gong”