PHILADELPHIA--Center City's Avenue of the Arts was aglow Friday night with the opening of the Divine Performing Arts (DPA) "2009 World Tour" show at the Merriam Theater. Philadelphia is one of three U.S. cities (Ft. Lauderdale and Atlanta are the others) to welcome the New York-based international dance company at the beginning of its 2009 tour.

The company has been touring globally since 2006. This year, DPA's three dance companies will tour 260 shows in 80 cities on four continents. For their opening shows this year, DPA brought to stage all new music and dance pieces. 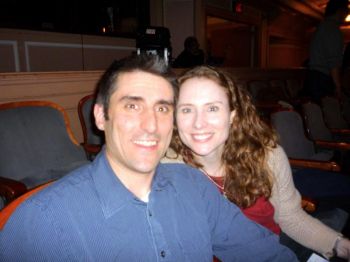 "We were in Beijing some years ago and saw a story of the Monkey King posted on the wall of the Forbidden Palace," Amy said. "So it really stuck in our minds."

In the piece "The Monkey King Triumphs," the Monkey King accompanies a monk journeying to India to receive Buddhist teachings. Monkey King, who is endowed with supernormal abilities, was charged with the mission of protecting the monk along the way. Inevitably, trouble arrives but the shrewd Monkey King comes to the rescue.

A pharmacist and paralegal, respectively, Rob and Amy are avid opera goers. "I was very impressed by the singers, the lady especially--she was really good," said Rob. He refers to Soprano Pi-ju Huang, who sang "Hesitate No Longer." Huang, who earned a B.A. in vocal performance in Taiwan and Texas, has sung lead roles in more than 10 operas.

A unique feature of DPA performances is their emphasis on traditional Chinese values, such as justice and faith. Some dances tell stories of religious faith, persecution, and hope. The Chinese meditation practice Falun Gong, whose spiritual and health benefits have drawn tens of millions of people to it since its introduction to the public in 1992, was the center of a few of the pieces.

The couple said that they were pleasantly surprised by the pieces depicting the courage and struggles of Falun Gong practitioners in Mainland China, where they are persecuted by the Chinese regime.

"We didn't expect them coming in, but it was very good," Rob said. "There's definitely a message of a sacred path and it [the performances] really explain their [Falun Gong practitioners'] existence in China and here."