(Clearwisdom.net) December 10, 2008, was International Human Rights Day, Although it was a cold winter's day, Swiss and German Falun Gong practitioners held a Falun Gong Information Day to clarify the facts and expose the persecution of Falun Gong by the Chinese Communist Party (CCP). 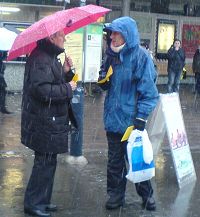 Passersby learned about the persecution of Falun Gong 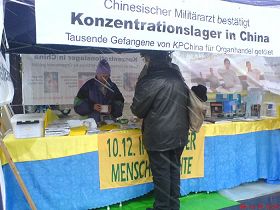 Passersby stopped to sign a petition to support Falun Gong 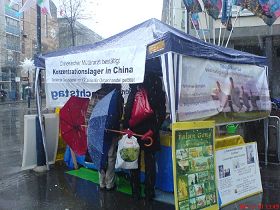 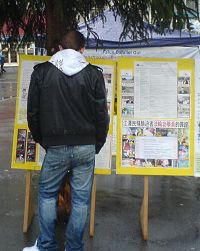 Passersby read the facts on the poster


Basel: "Stop all this evil as soon as possible"

The activity was held in Clara Square in the center of Basel, the second largest city in Switzerland. Practitioners sought to publicize the CCP's nine-year persecution of Falun Gong.

It snowed all day and was very cold, so people were walking very fast. But many did stop to view the display boards and were shocked by what they saw. Some even went to the desk to ask for more detailed information and to sign a petition to support Falun Gong.

A man who already knew about the persecution came up to the desk specifically to express his anger toward the CCP.

Many expressed their desire for an end this evil and hoped that such human rights violations would end soon.

On December 10, 2008, practitioners in Berne held an Information Day activity in the city center, eespite the heavy snowfall. Many people were moved by their perseverance and took the initiative to come over to express their concerns. Many people signed a petition to support Falun Gong.

An older lady looked at the photos depicting the brutal persecution of Falun Gong practitioners on the banners and said to a practitioner, "It's horribly cruel, but I believe that they (referring to the CCP) will be punished. Definitely." Then she pointed at the practitioners in the photos and said, "I will pray for them."

The snowed and the cold made many people show their concerns. A lady said to a practitioner, "It's so cold today, and you've been really working hard." The practitioner replied, "It is indeed cold, but whenever I think of Falun Gong practitioners who have been tortured to death in China, I feel I'm too comfortable." After listening to the practitioner's explanation, the lady smiled and wished the practitioners success.

A student asked for a dozen signature collection sheets and said that he wanted to encourage his classmates to sign the petition.

Many people asked for truth clarification materials and signed the petition. Everyone from the Amnesty International booth came to the Falun Dafa information desk to sign the petition and show their support.