(Clearwisdom.net) December 10th, 2008, was International Human Rights Day and also the 60th anniversary of the United Nations' Universal Declaration of Human Rights. Falun Gong practitioners from the UK went to the Chinese Embassy in London and Manchester to peacefully protest against the Chinese Communist Party (CCP)'s prolonged persecution of Falun Gong. The practitioners, who follow the principles Truthfulness-Compassion-Forbearance, want people to know about this human rights calamity that is happening in China. The activities called upon the international community to uphold civilized values and take concrete action as soon as possible to defend human rights and stop the persecution. 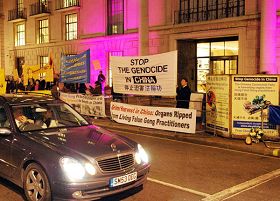 When interviewed, practitioners attending this event expressed a common hope: to fully expose the CCP's tyranny and trampling on human rights, and to help everyone in the world see through the CCP's lies and help stop the persecution of Falun Gong.

A British practitioner, Sean, said, "Serious persecution of human rights still exists in many countries of the world, especially in China. People have been brutally persecuted for their religious beliefs in history, such as the Christians who were fed to lions. Today, the tragedy of being persecuted for one's beliefs is still happening, which is a sad and serious fact. A totalitarian regime is persecuting its own people while governments of democratic countries turn a blind eye. This should not continue."

Falun Gong practitioner Ms. Bi, who just came from mainland China, said, "In China, people are deprived of human rights, deprived of the freedom to cultivate Truthfulness-Compassion-Forbearance. Those who do so are being tortured. Today is International Human Rights Day. I came here to call for human rights. After the CCP started the persecution of Falun Gong in July 1999, I went to Beijing to peacefully appeal, to demand freedom of belief and the basic rights of a good citizen. As a result, I was immediately thrown into jail and brutally tortured. Police at the jail once told me, 'Here we do not allow you any human rights. You appealed to have freedom of belief. But we don't have it here.' In fact, the CCP philosophy is that as long as you want to defend your religious rights or do not give up your belief, it will continue to persecute you, even to death. Today, at the Chinese Embassy, I demand the CCP immediately stop persecuting Falun Gong and give people back their freedom to follow Truthfulness-Compassion-Forbearance to be good people."

Falun Gong practitioner Ms. Zheng, who often "clarifies the truth" to Chinese people in London's Chinatown, also participated in the protest. She said that she came to speak out on behalf of Chinese people, and to fight the CCP's human rights violations, especially the persecution of Falun Gong. Also, she would like to tell her fellow countrymen from mainland China that the CCP's disintegration is imminent. Only after the CCP dissolves can there be human rights or freedom of belief in China. During recent months in London's Chinatown, she found that having learned the truth, more and more Chinese people have quit the CCP and its affiliated organizations. The Sichuan earthquake and poisonous milk formula incidents helped more Chinese people see through the true nature of the CCP and give up thinking the CCP might improve its human rights. Nowadays the number of those who have quit the CCP is increasing rapidly.

“650,000 Yuan in Cash Taken after Mrs. Zhang Yueqin and Four Members of her Family Detained in Lubei Police Department in Tangshan City”