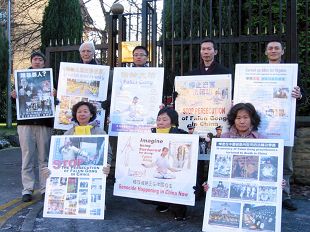 The activity began at 9:00 a.m. and concluded after 12:00 p.m. The practitioners peacefully did the exercises, distributed truth-clarification flyers to passersby and to those who came to the Chinese Consulate for visa issues.

For nine years, Falun Gong practitioners have peacefully resisted the persecution in China. Through their efforts, the world's people have recognized the practitioners' peacefulness, rationality, great compassion and tolerance, and have come to clearly see the CCP's brutality. Outside the Chinese Consulate, most of the Chinese people who came in and out of the consulate smiled at the practitioners, and some people asked the practitioners to help them quit the CCP and its affiliated organizations.

“Practitioners Call for an End to CCP's Persecution of Falun Gong before Summit of China, Japan, and Korea (Photo)”