Co-hosted by Reporters Without Borders, the Liberal Party group in the European Parliament and the Taiwan Democratic Foundation, the 2008 International Conference on Human Rights in China convened at the European Parliament Headquarters in Brussels on October 2. The main goal of the conference was to appraise the human rights situation in China after the Olympic games, and to adopt a report for the United Nations to examine the human rights abuses by the Chinese Communist regime. Twelve International Human Rights organizations and several veteran European Parliament members attended the conference. In the seminar on the topic of freedom of religion and belief, representatives from the Coalition to Investigate the Persecution of Falun Gong in China (CIPFG), Friends of Tibet, the Uyghur World Congress and other organizations made speeches exposing the recent abuse of religion and belief by the Chinese Communist regime. The subject of Falun Gong received wide attention. 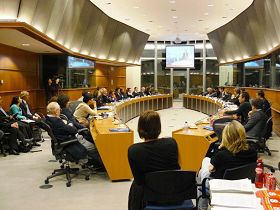 In the seminar on the freedom of religion and belief, the subject of Falun Gong received wide attention 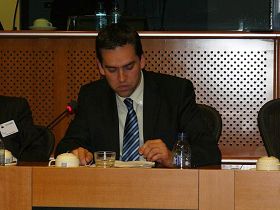 Mr. Eve from CIPFG speaks during the conference

Mr. Graham Watson, leader of the liberal Party group in the European Parliament, said in his opening speech: "If you happen to be in Washington DC on a Sunday afternoon, you could go to the Chinese Embassy and you would see many Western and Chinese Falun Gong practitioners there doing Falun Gong exercises and striving for the freedom of belief." He pointed out that over sixty percent of torture cases in China are related to Falun Gong. An independent investigation in 2006 further confirmed the Chinese Communist regime's atrocities of harvesting organs from large number of Falun Gong practitioners.

The vice president of the European Parliament, Mr. Edward McMillan-Scott, who chaired the seminar, said, "The biggest persecution in China now aims against religious groups, especially the persecution against Falun Gong. This is a kind of genocide. The international court should set up a case about this."

Mr. Willy Fautre, the director of Reporters Without Borders said during his summary of freedom of belief problems in China, "China has no freedom of belief now. Moreover there is no improvement whatsoever after the Olympics."