Practitioners Call for an End to CCP's Persecution of Falun Gong before Summit of China, Japan, and Korea (Photo)

On the morning of December 12, 2008, Falun Gong practitioners in Fukuoka City delivered an open letter to the Chinese Consulate. The letter was addressed to Chinese Prime Minister Wen Jiabao and demanded that the Chinese Communist Party (CCP) immediately stop the persecution of Falun Gong. 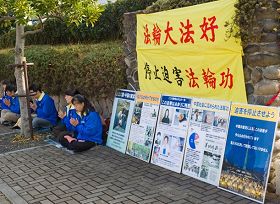 This event was authorized by the Japanese police. Many police officers came to look at the posters. Some said, "Falun Gong is the most peaceful group. The practitioners are excellent."