(Clearwisdom.net) From November 7-9, a major event known as Green Weekend was held at the Exhibition Centre in Helsinki and attracted more than 20,000 visitors. The event was divided into three sections. The Falun Gong Association of Finland took part in the crafts exhibition. The practitioners distributed handmade paper lotus flowers, introduced the beauty of Falun Gong, and informed people of the brutal persecution of Falun Gong taking place in China. 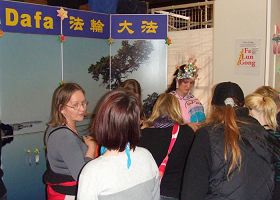 Anna is teaching people how to fold paper lotus flowers. 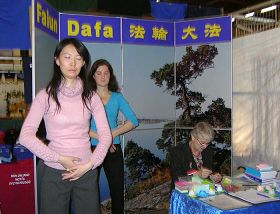 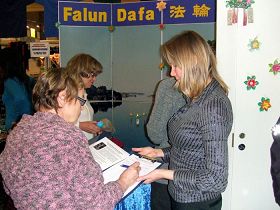 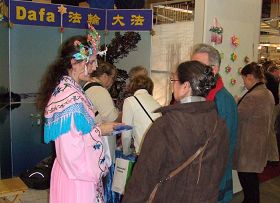 Practitioners performing the Falun Gong exercises attracted visitors to stop and watch. Many people came to ask for the address of the practice site. After they heard about the persecution, more people signed their names to support Falun Gong.

A woman requested a Russian version of the book Zhuan Falun, saying that she was prepared to start practicing Falun Gong after Christmas. A journalist who was stationed in China for many years originally was misled by the CCP's propaganda and believed Falun Gong was politically motivated, but after he learned the facts, his misunderstanding of Falun Gong was cleared up. A young girl named Sara signed her name to oppose the persecution, then came back later and requested a hundred leaflets. When asked what she wanted to do, she said, "I'm going to give them to my colleagues and friends."