(Clearwisdom.net) On November 8, 2008, Falun gong practitioners held an activity to clarify the truth at Kroepke Square in Hannover, exposing the crime of harvesting organs from living Falun Gong practitioners committed by the Chinese Communist Party (CCP), and appealing to all people to help stop the persecution. Many people expressed their support for Falun Gong. 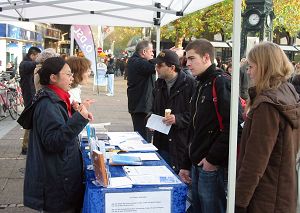 Practitioners clarify the truth about the persecution in China 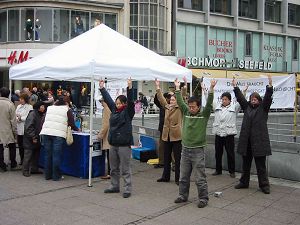 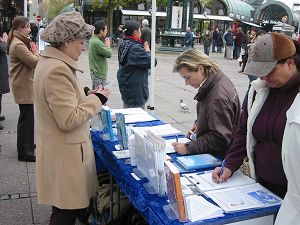 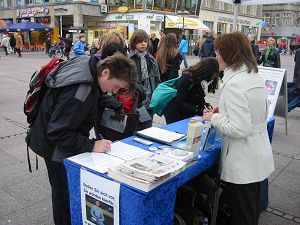 Saturday in Kroepke Square is full of shoppers. Many people paused at the Falun Gong information booth. Most of them were shocked and some became angry when they saw the displays describing organ harvesting from living practitioners. People visited the booth to sign the petition in a seemingly endless stream. Many people asked for detailed information about the persecution after signing their names.

A nurse whose job is assisting in organ transplantation surgery in a hospital told a practitioner that she was really sorry for those practitioners whose organs are being removed. She said there were some doctors from China in her hospital. She also mentioned the Tiananmen Square massacre. She said she had been to Tiananmen Square five days before the massacre, and she saw many students there who wanted democracy. She definitely believes that the CCP army opened fire and slaughtered many students. However, those doctors denied this and even said that it was the students' fault. Their attitude really disgusted her. Practitioners told her that this was the result of the CCP's lies.

A middle-aged man from Iran stayed at the booth for a long time. He read the booklet about Falun Gong being persecuted in great detail. He said, "In this world, everyone has a right to think and live according to their own ways, and this right should not be overruled by any political system or any politician." He was very sympathetic to the pain China Falun Gong practitioners have suffered. He said that he came to Germany in the time of Iran's Khomeini, and he deeply knew the importance of freedom of thought and speech for each person.

One German man said to practitioners, "The CCP is bad, and I knew this long ago. I don't like it. My company wanted to me go to China to work recently. It was a good position, but I refused. I don't want to work in a place without human rights. You are doing very well. Keep going."

A middle-aged man was very irritated after he read the truth-clarifying display boards. He said somewhat annoyed, "What is actually wrong with China is that Mao killed plenty of Chinese people in his time, but even now many Chinese people worship him." He couldn't understand why the Chinese people would worship a butcher, and why they didn't awaken.

Two German boys asked the practitioners about the black cage. They were astonished when practitioners told them that, in China, arrested Falun Gong practitioners were put inside such cages and then handcuffed. One of them asked for a newspaper and said that his sister understood Chinese. He wanted to take it to his sister to read.

When the day was nearly finished, a Chinese woman came to the information booth. She told practitioners she was from Taiwan and had gotten married in Germany. She said her sister is a Falun Gong practitioner and has told her many times that Falun Dafa is good and suggested that she practice. She said she had only done the exercises following tapes at home and wasn't sure whether she did them correctly. She asked if practitioners could correct her movements.

“Kuala Lumpur, Malaysia: Rally Held to Support the Brave People Who Have Quit the CCP and to Expose the CCP's Atrocities (Photos)”