Kuala Lumpur, Malaysia: Rally Held to Support the Brave People Who Have Quit the CCP and to Expose the CCP's Atrocities (Photos)

(Clearwisdom.net) As the fourth anniversary of the release of The Epoch Times editorial series Nine Commentaries on the Communist Party approaches, the Malaysia Service Center for Quitting-the-Chinese Communist Party (CCP) and local residents held a rally in Queen's Park in Kuala Lumpur on November 16, 2008. They recognized the 45 million brave Chinese people that have quit the CCP and its affiliated organizations and promoted the Nine Commentaries. They also exposed the CCP's atrocities and sincerely advised Chinese people around the world not to be deceived by the CCP and to quit for their own safety. 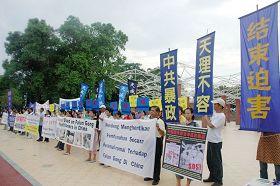 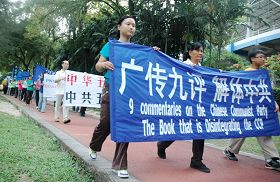 A march supporting the Three Withdrawals

The rally began at 5:00 p.m. Mr. Wu, spokesperson for the Quitting-the-CCP Service Center, and Mr. Zhang read an open letter to Chinese people around the world. Mr. Wu read it to the audience in Malay and Mr. Zhang read it in Chinese. 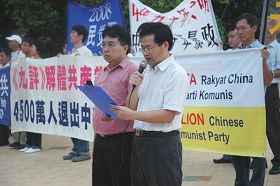 Mr. Wu (left), spokesperson for the Quitting-the-CCP Service Center, and Mr. Zhang (right) read a letter of advice to all Chinese people

Mr. Peng said, "The Epoch Times published the Nine Commentaries and initiated the 'Three Withdrawals'--withdrawing from the Chinese Communist Party, the Youth League and the Young Pioneers. It aims to have people sincerely break away from the CCP and truly renounce it. As of today, more than 45 million people have announced their withdrawals from the CCP and its affiliated organizations on The Epoch Times website."

He continued, "Over the past several decades, the CCP has committed numerous crimes against the Chinese people. In particular, its persecution of Falun Gong is inhuman and horrible. Since July 20, 1999, according to official reports, at least 3194 Falun Gong practitioners have died because of the persecution. The CCP has manipulated a quarter of its national resources to illegally arrest and detain a large number of practitioners and has employed at least over a hundred methods of torture, including rape, forced labor, brainwashing, and live organ harvesting to persecute Falun Gong practitioners. China has become the world center for organ transplants and organ trafficking and the largest exporter of human body specimens. It is a tragedy and truly shameful for the Chinese people!"

Atiullah Mobd Asri, a medical student at the National University of Malaysia

Atiullah was in the audience at the rally. He said that the activity was very beneficial because many people in Malaysia, particularly the Malays, have little knowledge of the nature of the CCP. The activity allowed him to gain a deeper understanding of the CCP's evil nature.

During the interview, Atiullah expressed his sorrow over the Falun Gong practitioners who have been persecuted. He said, "Regarding the live organ harvesting, I'm extremely surprised! It's got to be illegal!"

Muhammad Azfar is taking courses to learn to help the blind at the Special Education Teacher Training College in Kuala Lumpur. He told the reporter, "I think today's activity was helpful--it should be held more often, because we thought the Communist Party no longer existed, but it still does. Not only that, it is persecuting people."

Muhammad could hardly believe what he learned about the ongoing harvesting of organs from living Falun Gong practitioners. He said this should not be happening and it saddened him.

After the speeches at the rally, a march supporting the Three Withdrawals set off, drawing the attention of many locals. At the same time, volunteers from the Service Center for Quitting-the-CCP distributed materials and the Nine Commentaries.