(Clearwisdom.net) On November 8, the city government of Campbelltown issued the Best Cultural Award to the Falun Gong Association entry in the Fisher's Ghost Parade.

More than 100 groups and 2,500 people attended the parade on November 1, and more than 20 thousand people watched it. Since 1999, local Falun Gong practitioners have taken part in this parade, and won different awards every year.

Practitioners also set up an information booth, and passed out many truth-clarifying materials to the local people. 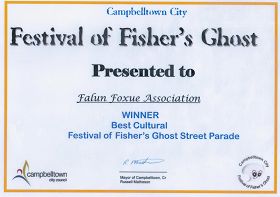